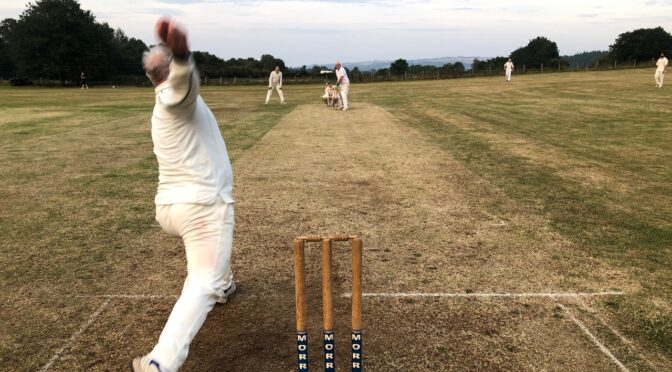 On a very overcast muggy August evening, KSOB were the visitors to Riding Mill for their game against the mighty Mallards. As skipper Buxom was still en route, the opposition captain was keen to get things underway so vice-captain McCaffery went out to the middle and, as is his wont, lost the toss and we were put into bat.

Skipper Buxom arrived at 5.55pm and was advised of this fact so, 15 minutes later (everyone making efficient use of the time there!), the game started with Kent and Hall opening the batting for Mallards and Ferris opening the bowling for KSOB. After the first ball, Kent was walking (storming?) back to the clubhouse given out LBW by umpire Taylor. Needless to say there was a conflict of opinion as to the decision but, to be fair to the umpire, there was a lot of thought given before raising the out finger. Thacker replaced Kent at the wicket, somewhat earlier than expected, and scored a single off his second ball preventing Ferris from opening the bowling with a wicket maiden, as Hall played it safe with the 3 deliveries he faced.

From the tree end, Beth Absolom bowled the 2nd over and went for 9 which consisted of a 4 for Hall and multiple extras. Ferris kept it tight for his 2nd over and Absolom started her 2nd over with 3 dot balls before being hit for another 4 by Hall. She got her revenge the next ball though by having Hall caught by Willett for 9. After 4 overs, Mallards were 22 for 2 – a slow and steady start. McCaffery replaced Hall and both he and Thacker set about bowling, particularly Thacker who hit several fours off the bowling of Anderson and Willett, the change bowlers. After hitting one of these boundaries, Thacker retired on 31 not out, which apparently brought some questions from the opposition captain regarding retirement total. McCaffery was slightly perturbed by this but the incoming skipper said that it’s retire at 30 and that’s what it will be. Strange reason to grumble though.

Buckley and McCaffery continued where Thacker had left off by scoring regularly with Buckley scoring a four early in his innings. Despite KSOB having taken the catch of Hall, there was a theme of dropped catches running through the Mallards innings as there’d been a few drops by the fielding side. After Willet’s second over, Absolom came back on and, at the start of her 4th over, nabbed the wicket of McCaffery who was caught by Bedford, the rascal. Latif replaced McCaffery at the crease.

By now, Buckley was batting practically one-handed as he’d knackered his arm hitting a boundary on the off-side. Not able to hold the bat properly or put any strength/power into any shot he played, Buckley embodied the spirit of Cowdrey and played on until he retired on 30 not out. Leading by example. Replaced by Potts, Latif and Potts kept the scoreboard ticking over and, despite Latif being run out for 8 and Potts bowled by Moir for 4, Mallards ended up on 124 for 5 after their allotted 16 overs. It felt much longer though as it had taken 75mins to get through the 16 overs for some reason.

After a quick turnaround between innings, Mallards were in the field and ready to go but kept waiting by KSOB (who’d been keen to get underway but had spent most of the evening taking their time on most things). KSOB opened with A Moir and Sailesh whilst Mallards opened with Cleaver from the field end, who’d over-ruled his skipper who’d wanted him to open from the tree end. It became immediately obvious that KSOB weren’t overly worried about time as they hit Cleaver for 15 off his first over. Despite the fading light, the reply might not take that long it seemed. Browne took the 2nd over from the tree end and also went for 15 meaning that KSOB were 30 without loss after just 2 overs. Buckley persevered with his opening choice of bowlers and adapted the field accordingly to reflect Sailesh’s shot selection and he was subsequently caught on the boundary by Thacker off Cleaver’s last ball of his 2nd over. In the meantime, Moir retired after a quickfire 33 not out and Bedford and Menton were now in the middle. After 6 overs, KSOB were 54 for 1 which was only 4 runs ahead of where Mallards had been at the same stage. Both Browne and Cleaver had gone for 27 runs each off their first 3 overs. Mallards had dropped a couple of chances by this point too, which was something that would continue with fabulous consistency for the remainder of the game. Cleaver’s final over only went for 2 runs and Browne’s last over went for 9, though it did deserve a wicket.

Replacing Browne and Cleaver were Thacker from the field end and Crombie from the tree end. Their first overs were quite tight going for just 2 and 4 respectively. The light was now fading ridiculously fast and Buckley called for the pink ball after consulting with the batsmen and umpires. For some reason, the opposition captain had taken umbrage at this, despite talking about it during the Mallards innings! Keeping it tight with the pink ball, just a further 10 runs in total came off Thacker and Crombie’s second overs. Thacker and Crombie are also thinking of opening a cider brand to match their names combo. Slowly but surely, the batsmen were starting to open their shoulders somewhat and the fielding side were helping them a fair bit by either dropping catches or letting the ball go under their feet instead of using their hands (no names mentioned here Buckley!!). With 2 overs remaining, KSOB were 101 for 1. 24 needed off the final 12 balls. After Thacker’s first 2 balls of his final over going for a 2 and a 4, the field was pushed out to save the boundaries and Thacker took the wicket of Menton with is next delivery for a nice knock of 25. The incoming batsman was Ferris and he saw out 3 dot balls due to some good bowling and nice fielding. One over to go and KSOB were on 107, so 18 still required. Doable but difficult.

After some consultation, Crombie reverted back to spin bowling instead of his medium pace and went for singles and twos, meaning that KSOB finished on 115 and Mallards had won by 9 runs just as the rain started to fall a bit heavier and more consistently, so great timing there. Yes, that’s right. Mallards had won a game which came as some relief after a few defeats (albeit close ones) and a tie! Just a pity that the season finishes in just over a week’s time.

Great batting, fielding and bowling all round from Mallards. A great team effort.