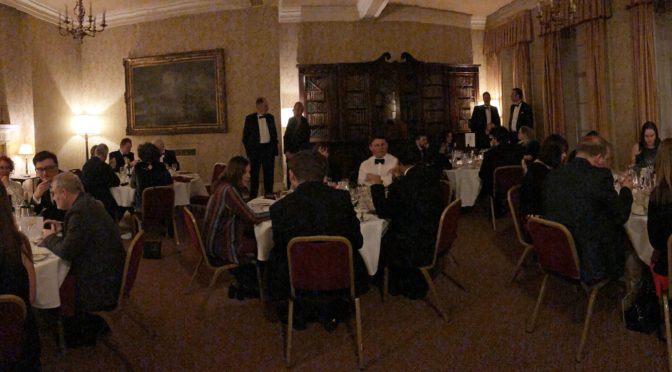 Whoever said ‘it’s not the winning it’s the taking part’ had clearly never been eligible for a Mallards end-of-season award.

Each year, at the annual dinner, awards are handed out to a host of players who have contributed to the season in a memorable way.  For the record ‘memorable’ doesn’t necessarily mean ‘impressive’ or ‘skilful.’

These awards, mostly hand-crafted miniature works of art, are much prized and keenly fought over. The current holders are as follows:

Cross Bat Trophy: Mark Buckley (for having scored consistently and so that he might look kindly on the ex-captain during the coming season)

Mallard Ball: Tony Cleaver (for a superb comeback and showing all those youngsters that there’s still plenty of knack in the not-so-old dog yet!)

Swoop fielding: Ian Watson (for a  great catch vs Benwell and Walbottle and, for some remarkable fielding with dog in hand – rumours are he’s got himself a pet chihuahua and an off-white papoose for the coming season)

Mallard Duck: Colin McCaffery (nothing like buttering up your co-vice-captain as well, and to be fair he did score the most ducks this season).

Asti-Spumante Moment: Colin Haylock (for the 5th time in a row taking Dinesh Rawlley’s wicket – used to be Taylor he was afraid off but now he’s Colin’s Bee-atch!)

Gentleman Mallard: Ian Stone (amazing that it’s taken this long to give our longest serving and still-playing member of Mallard official recognition of the true gentleman he is)

John Robinson Balletic Batting Moment: Tom Browne (not quite a moment, more a blitz for an utterly brutal 30 off 11 balls againstOvingham/Ovipart)

Mutilated Mallard: Dave Cox (after admitting (or was that blaming?) Mrs Cox for losing or abandoning the trophy in the wee hours after the last dinner, and hastily knocking up a very impressive new one featuring a used tube of Ralgex it seemed only fitting that he should get to keep the fruits of his labour for another year)

The Pen is Mightier Than The Bat Award: Gareth Taylor (after the previous year’s winner securing this trophy for his emoji match report, and Alan Boyes now allegedly retired, our own Club Despot took on the surrealist mantel with a match report inspired and loosely ripped off from Ogden Nash’s classic “The Tale of Custard the Cowardly Dragon”, let that be a lesson to you Peter Nitsch)

Friendly Fire Trophy: Peter Beacock (Bill Quay, 2 runs to win, last ball and a frantic scramble when the last shot meant that the best outcome was now going to be a draw. Cue the tightest of run-out decisions and there at square leg was Glenn Steel with his finger slowly raising to the sky. However he didn’t attend the dinner, so we awarded the trophy to Beakers for not having run fast enough in the first place!)

Perils of Tourism Trophy: Liaquat Latif (no tour this year, but Trevor’s wife & daughter were threatening to leave home if we didn’t get it off their mantlepiece. Fortunately one person played more away games than anyone else by quite a margin and therefore we stretched the definition of tourism – that said we do expect him to the first to sign up when we do go abroad again)