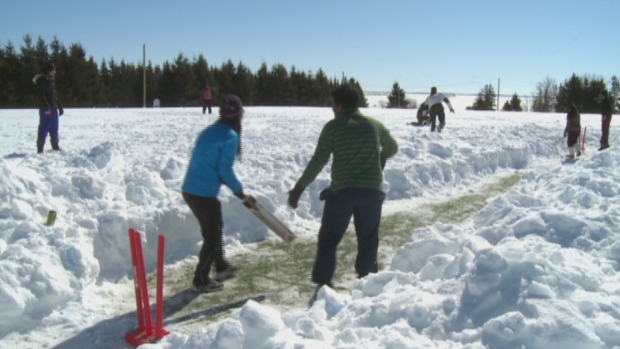 It was an auspicious start.  All 11 Mallards had arrived at Walbottle Campus by 5.57p.m.  A quick calculation (using mental arithmetic, not a mobile phone) showed that the Mallards were sporting an average team age of 51.3 years – providing both wisdom and guile in unbeatable proportions.  Therefore, the 1 minute warm up that followed seemed both adequate and appropriate.

The opposition appeared strangely unfamiliar – a situation explained by an impending cup game at the weekend which they wished to practice for – the big guns had been brought out.  Seasoned Mallards feared the worst, though whatever was coming their way could not have been any worse than the previous game at the venue (see above picture).

Having won the toss and elected to field, 11 spritely Mallards gaily skipped out on to the pitch.  Then they got serious.  Browne (1-12) and Dunhill (1-20) opened the bowling, immediately finding a tight line and good length – reaping their just rewards with a wicket apiece – and reducing the opposition, Benwell and Walbottle, to 13 for 2.

Thompson and Nitsch, at first and second change, continued to probe outside the off stump.  Then Benson, Mexter, Stone and McCaffery all contributed with steady(-ish) overs.  However, Benwell and Walbottle rose to the challenge and began to show a disturbing level of class, with a series of straight sixes and other highly inappropriate shots which resulted in Davies, Robson, Ridley and Jenkinson all retiring with scores of 33, 30, 23 and 14 respectively.

The Mallards showed their usual prowess in the field, turning twos into singles and leaping and diving to save every possible run.  One highlight was a sprinting full stretch diving attempt by Browne to grasp a spiralling hook shot (which was hit so high it almost hit the oyster catcher – more on this later) only to see the ball dribble agonisingly from his fingertips.

Regardless of these heroics Benwell and Walbottle finished their 18 overs on 128 for 2. The big guns had hit their target.

The Mallard team huddle that followed concluded that, despite the presence of said guns, it was a very achievable target – the Mallards having their own big guns in Taylor and McCaffery.  They opened the innings, both striking the ball well.  However a well-placed field and a disciplined bowling attack stymied the run chase and led to the regular loss of wickets and a score of just 35 for 2 off 10 overs.  Nitsch (6) and Wood (13) both got themselves in but were overcome by some quality spin bowling (with the ball that bowled Wood reportedly spinning back viciously from 3 feet outside off stump).  Malik’s steady 32 not out (retired) was the highlight of the Mallards reply which ended in a respectable yet losing 88 for 4.

There ended another evening’s cricket – but not the lessons for the day.  Browne, the Mallards’ resident ornithologist, informed the team of the flight pattern and call of the oyster catcher (which previously narrowly avoided the spiralling cricket ball) and Taylor found a copy of GCSE Foundation Mathematics – resulting in a recalculation of the average age of the Mallards team to 49.6 years (using the mean rather than the median, of course!).

So, all was not lost…. the Mallards left Walbottle Campus sadly defeated on the pitch but happily enriched in the mind.