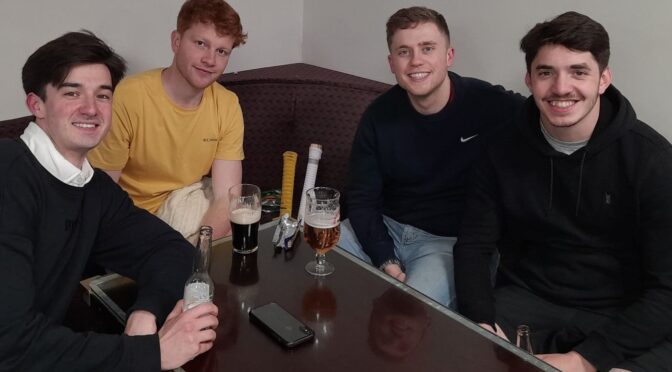 Second week of the season and already we’re into the double-headers. MCC arrived at Greenside in good spirits after a strong showing at Prior’s Park the night before with Mallards new youthful recruiting drive seemingly playing dividends. The young newcomers are showing early signs of understanding the team ethos, having already worked out the quickest way to the bar (see above). This game, against long-time opponents Davipart in chilly, overcast conditions, was to show that they’ve also bought in to the Mallardian way with the bat.

Mallards were to bat first on a hastily prepared practice pitch, made available at short notice following some confusion surrounding the fixtures. The pitch reporters noted that the surface was on the soft side and with one very short boundary to be protected somehow; however as true cricket tragics, we’ll play on any old surface and nary a complaint was to be heard. The only concern was around the width of said strip, coming in at well under the regulation 10 feet and causing a few of the bowlers to sweat a touch.

Cox and Skipper Malik had the honour of being first to sample the conditions, under the pinpoint accuracy of Thompson’s opening over. Cox dutifully smothered the first couple of balls before sweeping (who sweeps their third ball of their season? Honestly!) a difficult chance to deepish midwicket, who was unable to hold on and the Mallards innings was underway. There weren’t many runs in the early overs; accurate bowling and neither batsman finding a rhythm meant the run-rate hovered between 2 and 3 an over and it wasn’t until the 6th over that either batsman was able to find the boundary.

Despite trying to play positively, things didn’t improve much and the halfway point of the 18 over innings came and went with the score on just 23. Then Marley came on to bowl.

His first over was wisely seen off as a maiden, as he was able to not only find some swing with the pink ball but also control it with precision. Cox was the first of Marley’s victims, looking to take on the long boundary but ultimately missing a straight one and departing for 18 and the score on 29. It quickly became 29/4 as Malik departed in the following over trying to pull one of Muggeridge’s deliveries into oblivion but followed through too enthusiastically, dismantling his own stumps. Debutant Pradeep was trapped in front by Marley for the first of several ducks in the innings, and was immediately followed by Binmore who was caught behind the very next ball.

Mallards All-Time Top Run-Scorer(TM) Wood and Standring tried to settle things down but that only lasted till Marley’s next, and thankfully last, over. Standring was out caught for 4 and Marley finished with figures of 4-1-3-4; had Davipart not dropped two chances off his bowling he could conceivably have had 6 wickets for one run!

With just three overs left and only 34 on the board, McCaffrey can be forgiven for having a swing but could not connect and was bowled by Muggeridge for the third duck of the innings. Butcher came in and tried the same approach, managing to add a few with Wood, before Wood, possibly still bamboozled by the ball before from Saith, which pitched fully 6 inches off the cut strip and spun back to be on track for hitting halfway up middle, spooned one up to square leg – out for 11. There was a suggestion that Cox as umpire may have been still considering the previous ball and missed a no-ball. Sorry Trev.

New batsman and new Mallard, Ramsey connected with his first ball and set off for what I’ll call a tight single, but Butcher was having none of it. To be honest a slightly comedic run-out was quite well suited to this innings by that point. The innings closed with MCC on 53/7, probably not enough but with the pitch throwing up a few surprises we had a slight chance if we could take an early wicket or two.

This was a good chance for our new found bowling talent to shine, and Edge took the new(ish) ball and was on the money from the start with some tasty movement. Browne at the other end also started strong, with a maiden first up. However that short boundary, which we had trouble targeting, seemed to be just that bit closer for Davipart and they were able to find it often enough to be a problem.

Edge found the breakthrough as Malik held on to a chance at long off in the fifth over with the score on 27. Browne struck in the following over, bowling Rye for 18. A sniff of an opening?

Browne struck again in the 8th, trapping Ladhar in front for 8, 37/3, before Standring broke through Dhillon’s defences and it was 50/4. Ultimately we just didn’t have the runs, and Davipart had plenty of overs left to knock off the remaining runs and we fell to a 6 wicket loss.

Thanks to Davipart for what’s always an enjoyable match, and we’ll see you again in a few weeks for the return fixture.