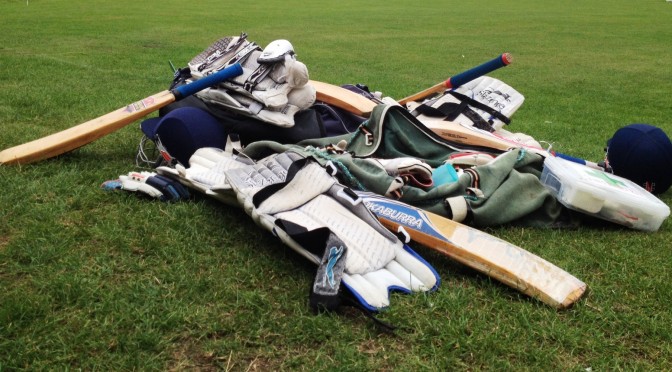 Opening opposition Seaton Burn took the opportunity to give several first-teamers a run-out while Mallards took the opportunity to give all their bowlers a game. Stand-in skipper Wood (all the elected hierarchy having clearly heard rumours of strong opposition) won the toss and chose to bowl to try and avoid a very early finish – an 18-over game was agreed to make sure the game didn’t finish in the dark.

A lop-sided Mallards team took to the field after playing a quick game of spot the batsman – the late withdrawal of the mighty Kent exacerbating a bowler-heavy problem.

Veterans Cleaver and Dunhill opened the bowling and both started well, just eight runs coming from the first couple of overs. Cleaver, in particular, was desperately unlucky not to get some early wickets, beating the bat several times and inducing a collection of top edges, all of which fell into gaps. After five overs, with the batting team having reached 33-0 they were replaced by Browne and Watson with the opening batsman well settled and the score continuing to mount. Five overs later it had reached 72-0 with both openers retired on 30. Haylock and McGuiness were the next two bowlers to step up and they both started well, Haylock bowling very neatly and McGuiness finally making a breakthrough with his first ball, bowling Garfield for 1.

Unfortunately, new batsman Fenwick was now finding his feet and the score continued to rise as the opposition reached 98-1 from 14 overs. Bowlers seven and eight, Wisbach and Nitsch came on to try their luck but there was none to be had as Seaton Burn finished on a hefty 136-1 from 18 overs. There’s little that can be said about the typically rusty early-season fielding – maybe try using hands next time out chaps – but special mention should be made of Wisbach and Haylock who have both clearly spent the winter perfecting their slow dive technique. Fine work, gentlemen.

Nitsch and McCaffery failed to avoid the skipper’s eye and were sent out to open the batting. Hopes that Seaton Burn would be generous were misplaced as the opening bowlers marked off their lengthy run-ups – a prelude to some early season chin music as Nitsch, in particular, had to perfect his ducking and diving. Runs were immediately hard to come by, only two from the first two overs. A brief flurry saw Mallards rise to 9 in the third over but that was a false peak as both openers were to perish on that total, Nitsch caught and bowled for 6 by Marshall (2 overs, 1 for 0) and McCaffery bowled by Adair for 3.  Gibbons and Wisbach arrived at the crease in close order and both started well, Gibbons finding the boundary from Radjiv, one of two sharp spinners brought on to continue the onslaught. The new pair settled things down as the score crept along to 19-2 in the eighth over when Gibbons fell to a simple catch from Singh.

Wood joined Wisbach at the crease and the scoreboard finally began to creep upwards as the pair added 20 in the next four overs, Wisbach, in particular, looking in good form. Unfortunately, with the score on 45, Wood called a quick single and his partner was left stranded by a sharp piece of fielding, run out for a well-made 18. A suitably penitent skipper hung his head in shame, so distracted that he then smashed a four to the boundary and was bowled next ball for 11 to leave the home side on 49-5 from 16 overs.  A brief flurry from McGuiness amid some hilarious yes-no-yes-no running with Browne ended with the former being unsurprisingly run out for 6 which still left time for Dunhill to be undone by a slower ball for 0 in the final over, Mallards eventually finishing on 57-7 with Browne unbeaten on 1 and Watson not out 0.

A difficult game played on a very cold night did not deter an excellent 100 per cent pub turn out as the beaten but unbowed Mallards shared dark, though unconfirmed, tales of senior defections to the Corbridge Cuckoos which will obviously be referred to the disciplinary panel. Hopefully harsh beer fines will result to deter any future infringements.

P.S. WE’VE GOT SIGHT SCREENS! TWO OF THEM. REAL ONES. LIKE PROPER CRICKETERS!