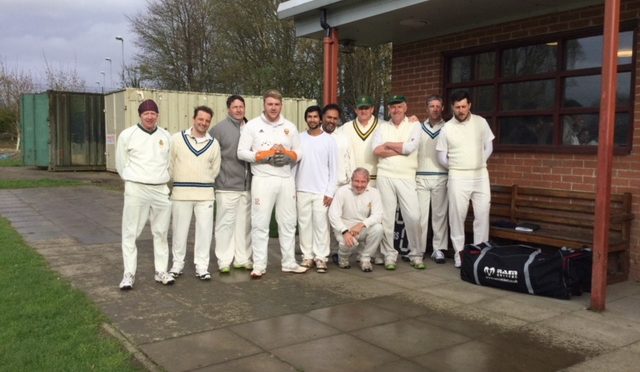 The Captain looked outside at the bleak, wintry landscape. There was no sign of humanity, even the polar bears had sought shelter. He looked back at his men, huddled together, shivering in the freezing conditions. He pulled on his long-sleeved jumper, muttered a quick prayer and, clutching a single coin in his blue-tinted hand, turned to leave.

‘I may be some time,’ he said. And then he was gone.  Sadly, he lost the toss and we had to field.

The season began, as always, amidst rain showers. The covers were off, then back on again, then off again as the sturdy warriors of Walbottle and Mallards heaved them up the steep hill towards the nets.  Latif, treacherously, hoped for a cancellation – dinner at Sachin’s later that night calling out to him. However, once the weather had settled a little a game of 16 overs was decided, the captains fearing the dark skies to come. Walbottle got off to a rapid start with nine runs coming from Browne’s first over. That was as good as it got for the home side. Dunhill began his spell in style, Malik clutching a catch at the second attempt at mid-off – a good catch but no match for what was to come.

Browne, smarting from his shaky start, steamed in only to see the ball sail over his head, swirling high in the grey skies, a lone fielder giving chase in the distant outfield. The fielding team sighed as they realised the lone fielder was Watson – even Watson sighed. Nonetheless, in true Mallards fashion he didn’t give up, running around in circles like a demented Morris dancer as the ball corkscrewed towards the earth before sticking out a hand and taking a superlative catch, whilst still having time to scream ‘YESSSSS!’ You could see the home team’s heads drop. They dropped even further when Dunhill trapped opener Harrington lbw in his next over to reduce the home side to 17-3 from four overs.  Browne chipped in with a maiden (1-11) and Dunhill finished off his spell with another very tidy over to end with 2-9.

Watson was next to step up, his confidence visibly boosted by his unlikely catch.  And boosted even more when he clean-bowled Cairns with his first ball. In his next over he repeated the trick, this time Robbie was the unfortunate victim.  With Latif bowling tidily from the other end Walbottle looked like a team who’d rather be at home, in front of the fire, roasting chestnuts or something – 31-5 from 10 overs.  Watson almost repeated his first-ball trick in his third over, Wood tipping the ball over the bar in true Schmeichel-esque style but nevertheless finished with the excellent figures of 2-5 from his three overs, Latif ending with 0-9 from his three.

With the score almost stationary – 37-5 from 12 overs – skipper Butcher decided to throw on his occasional bowlers. However, the wind was now in Mallards favour as Mussett, having swapped the keeper’s pads with Kent, bowled a wicket maiden finding the edge of the home skipper’s bat, his successor pouching the catch, standing up – 37-6. Malik bowled a couple of tidy overs for eight runs whilst at the other end, Holland, given his chance after impressing in the nets, bowled a lovely over for just one run.  Walbottle trooped off knowing the game was up, their final score just 48-6. An excellent bowling and fielding effort from Mallards in the cold conditions – only one boundary conceded in 16 overs.

Kent and Mussett opened the reply for Mallards with the home side hoping for an early finish. Latif, in particular, was keen to get away, his dinner reservation at Sachin’s getting perilously close.  Surprisingly Mussett blocked the first five balls – clearly having learned a defensive shot in the indoor nets this winter.  The sixth went for four. In the next over he hit two more boundaries as Latif started to dream of making the starters.

That dream, however, began to fade as Mussett was bowled in the fourth over for 17 and new batsman McCaffery, clearly tired from his earlier ball-polishing efforts, came and went quickly for 0 to leave Mallards on a precarious 22-2 from 6 overs.

Wood joined Kent at the crease and the pair dropped anchor, Wood scoring in true Morse Code fashion – only without the dashes: fifteen dot balls in his first sixteen balls.  The scoreboard at this stage appeared to freeze up and at the halfway point the away team were marginally ahead of the rate – 26-2 after eight overs. Still the batsmen refused to open up, manfully chipping away at the target, indifferent to the cries of ‘Hit Out or Get Out’ from the boundary. Latif saw his starter disappear and started to worry about his main course. 32-2 from 10 overs became 36-2 from 12, with 14 runs needed from the final four overs for victory.  Enough was enough. Kent finally opened his shoulders to find two boundaries as 12 runs came off the 13th over to leave Mallards one run from victory.  Wood was not going to give in so easily though, playing out one more maiden over to rob Latif of his  Vegetable Balti, before Kent hit the winning runs with 11 balls left. A perfectly-judged run chase by any standards as Mallards ran out winners by 8 wickets.  Kent finished on 24 not out, Wood, a steadfast 6 not out.

Latif dashed off, hoping there was at least some Kulfi left. The remaining Mallards gathered in the bar to celebrate an opening victory and warm their hands over a Tyneside Blonde. I think her name was Moira.