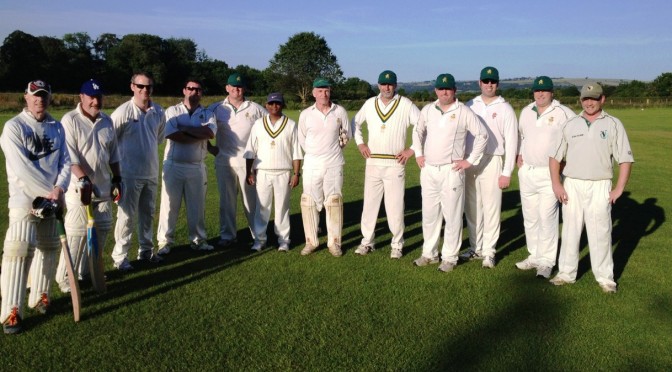 Mallards took the long trip out to Haltwhistle to face new opponents, the Wallace Arms, on another lovely sunny evening.

The home team’s youthfulness and consequently casual approach to time-keeping meant that they only had six or seven players at the ground by 6 o’clock so Mallards agreed to field first to give the youngsters time to get a few more numbers.

Regular opening bowlers Browne and Dunhill began brightly with only five runs coming from the first three overs, the former unlucky to see an outside edge slip from the grasp of the diving Beacock. Slowly, however, the home openers, the appropriately named Wallace and Grommit, sorry, Graham, began to hit their stride and after five overs had reached 26-0. Mallards fielding had been impressive up to this point with Haylock very nearly running-out Wallace with a direct hit. The only blot came when Cox dropped a steepling catch in the covers but in his defence the sun was making life difficult for fielders and he may have been distracted by the use of a bright pink ball.

Despite the batsmen’s growing prowess Browne and Dunhill finished their spells with the very respectable figures of 0-21 and 0-20 respectively as Hunt and Haylock took over the attack with Mallards still looking for their first wicket. Haylock’s first over disappeared for a couple of boundaries but Hunt, after conceding six from his initial over finally struck for the visitors, bowling Wallace in his second over, a wicket-maiden. With Haylock finding his range and Hunt bowling very tightly indeed the visitors were still keeping a lid on the scoring and after 14 overs the home side were in a decent but far from overwhelming position on 84-1 with Graham retiring on 33.

New bowlers McGuinness and Hayward were brought on to stem the tide but the former’s first over saw the faster scoring continue as the batsmen went for their shots, two more boundaries bringing the score up to 114-1 from 17 overs. Hayward’s introduction however, proved inspired as, with Parker retiring, he clean-bowled new batsman Nicholson for 0.

McGuinness joined in the fun in his second over, clean-bowling Swallow for 13 to finish with 1-15 from his two overs to set the scene for a dramatic final over.

Firstly Hayward struck again, bowling Thompson for 3.  He then removed the incoming batsman Charteris, belying his age by swooping to collect the ball and run the batsman out with a direct hit. Incoming batsman Bell, however seemed to take umbrage at this late fall of wickets and crashed his first ball for four before ending the game by hitting Hayward’s final delivery for a giant six which cleared not only the very high fence but the A69 to complete the innings with the home side on 134-5.

Kent and Wood led the Mallards reply but they began in stuttering fashion as Kent was bowled in the second over and the Wallace Arms bowlers found a very tight line to make scoring difficult, just seven runs coming from the first four overs.

New batsman Cox finally released the shackles with a huge six in the fifth over and then both batsmen found the boundary in the next over to get the scoreboard moving as they accelerated to 27-1 from six overs.

A switch in bowlers, however, tightened things up even further as spinners Charteris and Bell came on, with only 11 runs coming from the next four overs, just one boundary from Cox breaking up a succession of dot balls and a smattering of singles to leave Mallards well behind the scoring rate on 38-1 at the half-way stage.

The scoring rate then began to improve as Cox started to find the boundary and a four and a two in the 13th over brought up the pair’s 50 partnership and Cox’s retirement on 32.

Bowling hero Hayward joined Wood at the crease as eight further runs were added before Wood, forgetting his partner’s age, called Hayward through for a quick single, a direct hit sending the latter back to the pavilion for 3. Still clearly shaken with remorse Wood was then clean-bowled next ball for a sluggish 14 to leave Mallards in trouble at 63-3 from 15 overs.

Victory now looked highly unlikely but new batsmen McGuinness and Beacock remained positive, with the former hitting some very nice straight drives and the latter rediscovering some form to keep the score moving along to 80 from 19 overs before another dramatic last over.

Firstly McGuinness was well caught for 12 attempting another big hit before Beacock was clean-bowled for 6 to bring new batsmen Jordan and Browne to the crease, the latter having to drop the scorebook and quickly pad-up to join the fray and face a hat-trick ball.

Undaunted by his sudden moment in the spotlight Browne smashed the hat-trick ball for four before a single brought Jordan to face his first ball. As the visitors realised that next man due in, Dunhill, was still umpiring, fingers were firmly crossed that the new batsman survived the penultimate ball. Not only did Jordan survive it, he clipped it beautifully off his legs for another boundary before taking a single off the last ball to bring the innings to a close on a respectable if insufficient 91-5.

Both teams then headed to the Bowes Hotel in Bardon Mill where the home team established themselves on our fixture list for years to come by providing every player (except the veggies) with a plate of sausage, chips and onion gravy. Happy Days!