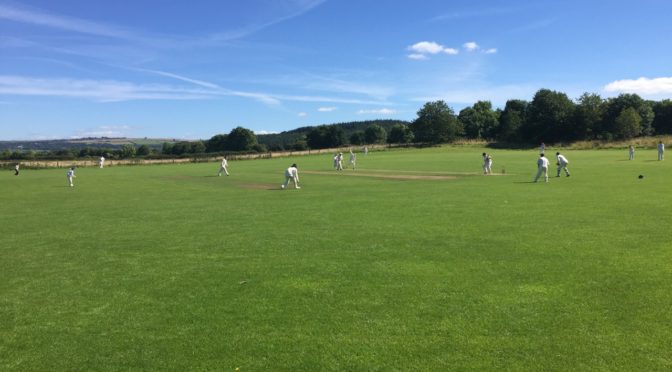 Two seasons ago the Mallards played in freezing conditions at Walbottle Campus, fielding as the hailstones rattled around the outfield. Having endured similar conditions at home to Nitsch’s Black Book XI just last week there were some suggestions that the team should change its name, with the Arctic Monkeys topping the poll.

Fortunately, as the teams gathered at Walbottle last night it was clear that the weather gods had decided to give them a break this week – there was even a sighting of a strange yellow ball in the sky which drew much comment and the occasional silent prayer of allegiance. Plans to sacrifice a lamb from a nearby field were only halted by the intervention of a large, rosy-cheeked farmer – no, wait, that was captain Butcher turning up slightly late, citing some arcane notion of work commitments. In his absence a hastily arranged committee had nominated Fixtures Secretary McGuinness as the most senior man present and he duly won the toss and elected to bat.

Nitsch (he of the Black Book) and returning legend Musset opened the batting and the latter underlined his youthful promise with two firmly driven fours in the first over. Sadly his senior partner could not match such endeavour – or cope with the very low bounce – and quickly succumbed to the sharpish Henton, clean bowled for 2.  Skipper Butcher (perhaps with work commitments still distracting him) succumbed in identical fashion shortly after for a solid 0.

Wood joined young Musset and things settled down as the former leant on his bat and watched his partner carve the ball around beautifully before being forcibly retired on 33 not out in the eight over with the score on 42-2. Buckley joined Wood and the score continued to mount despite both batsmen having some difficulty with the Taylor-esque bowling of Draper whose rag-bag collection of SGW caused much frustration, Buckley eventually holing out to a fine catch at a long leg for 7 with the score on 62-3 in the 11th over. McCaffrey joined Wood and the pair stepped up the scoring before Wood finally succumbed to the devilish Draper, playing on for 17 as Mallards reached a solid base of 77-4 in the 13th over.

Beacock joined MCaffrey but didn’t last long, bowled by Bateman for 3, which brought McGuinness to the crease. No doubt inspired by his brief cameo as captain, the latter blazed away from the off, finding the enormous leg-side boundary to get off the mark as McCaffrey dropped anchor at the other end. The pair added 24 in the next four overs before McCaffrey was bowled for 10 by the home side’s new youth prospect Dunhill. McGuinness was next to fall victim to the home-grown assassin, bowled for a rapid 21.

Dunhill then cemented his early bid for the Friendly Fire trophy by removing Watson in similar fashion for 2 as Mallards ended their 20 overs on a respectable 114-8, Thompson and Haylock both unbeaten on 1 apiece.

Mallards took to the field in chirpy mood, the usual ageing crew perhaps spurred by the youthful exuberance of Musset and Thompson. Such wild optimism reaped early reward when McGuinness, still revelling in praise of his batting, took a very sharp catch off his own bowling to dismiss the clearly gobsmacked Henton for 1.  Not standing on ceremony he followed this up in his second over, clean bowling Singh for 4 to reduce B and W to 18-2 from 4 overs.  But he wasn’t finished there. In his third over he lured youngster Abbas out of his crease and saw keeper Beacock sharply throw down the stumps from some distance back for a third wicket.

Watson, who had bowled very well at the other end for little reward then joined the party in his final over, producing a beauty to clean bowl new batsman Robbie for a duck. As the opening bowlers finished their spells, Mallards were starting to feel a sense of optimism having reduced the home side to 25-4 in 7 overs, Watson finishing with 1-16 and McGuinness an excellent 3-8.

New bowlers Musset and Haylock temporarily deflated that optimism, leaking 21 runs from the next two overs. However, both bowlers reacted well, changing their approach from then on: Musset reverted to spin from medium fast and Haylock stopped bowling pies. The brakes were firmly applied with just seven runs from the next five overs, the bowlers ably supported by the sharpest fielding performance in some time with many fine stops and returns pinning the batsmen down.

Musset finished his three-over spell for just five runs as an inspired bowling change from skipper Butcher saw Thompson take a wicket in his first over (his maiden wicket for Mallards!) bowling Banman for 0 to reduce the home team to 53-5 from 14 overs, needing 62 from the last six for victory.

Haylock then finished his spell, a fine 0-18 from four overs, his figures slightly marred by a six from his last ball from new batsman Hassan, who had replaced the retired opener Bell. Hassan now looked the only danger to Mallards victory hopes as he repeated the stroke from new bowler Nitsch clearing skipper Butcher by inches on the midwicket boundary.

Mallards were in no mood to let him deny them a first victory of the season though and Thompson and Nitsch maintained a solid off-stump line, backed up by more fine outfielding to keep the home team in their place, Hassan eventually being bowled by Thompson for 17, the bowler finishing with 2-19 from his four overs. Nitsch (0-8) finished the job, conceding just two singles from the final over as the away side ended their reply on 90-6, a Mallards victory by 24 runs.