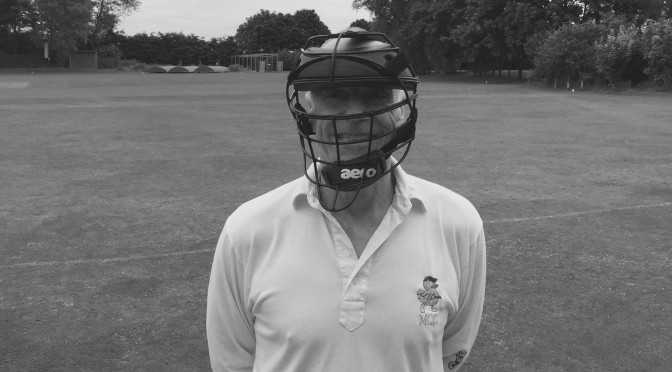 Mallards midweek magic against Benwell & Walbottle had given the side their first victory of the campaign and a degree of optimism going into the fourth game of the season, a home tie at Riding Mill against Excelsior Batters.

Little had separated the sides over the past two seasons, both sides winning twice in the four games contested. Mallards were hoping to overturn a couple of early season defeats into a two game winning hot streak, something not achieved since those long and hazy summer nights of 2014.

The toss fell favourably into the hands of Captain Cox who elected to bat. Wisbach accompanied Cox as they took positions at their respective creases. Thompson stepped in to field for the visitors and ‘two tone’ Gareth Taylor took his place as umpire fresh and full of tales from his trip to the school of umpiring. Thankfully the opposition did consist of some bowlers to get the balls rolling.

Against some tough openers, it was time for Wisbach to batten down the hatches and he clearly thought it best to try and see out the entire innings. A single off his first 16 deliveries was a welcome return. Cox’s dirty work at the other end helped to gain those less than essential runs. Taylor keeping a close eye on the total, 15 after 5 overs.

Wisbach’s Boycottian style of dot balls, only ever so slightly risky singles and disregard for run rate, frustrated the bowlers and helped to boost enthusiasm from the sidelines. His defiance was eventually undone by a delivery from Ahmed, going for a grand total of 9. Mallards were 40 for 1 in the 10th over.

Wood eased into things with a cheeky four. His trademark leg sided glances along with some snap decision making helped to boost the run rate. Meanwhile there was a welcome token visit from Peter Nitsch, his pooch and other village people looking for a slice of the action at a packed out Riding Mill. A flurry of singles and boundaries saw Cox retire for 30 not out (including 5 boundaries in total), allowing Gibbons to take to the field. A quiet start consisting of knicks and helmet malfunctioning soon blossomed into criminal damage. A pie chucked down the leg side was despatched for 6 into the car park and onto a land rover bonnet.

Wood’s twinkle toes and agility between the wicket was working wonders until Riding Mill’s ever present microclimate seemed to be his downfall. A sneaky second looked comfortable.  A fielder threw in close to the wickets and a sudden gust of wind seemed to knock off a bail. Dunhill’s eagle eye assured us all the ball had indeed knocked off the bail. He performed his duties and Wood was given out for 26. Bateman took his place at the crease. Taylor’s decisive not out call from an acute angle behind the stumps for a run out later on would be the highlight of a first innings umpiring masterclass.

Unhappy not to have cracked any windscreens earlier, Gibbons’ second pie in the sky was destined for Bateman’s wheels. Much to his relief it was deflected to safety by the trees.  A stern word at the end of the over deterred Gibbons from further felony and he would retire on 20 not out.

Bateman hit two further boundaries in quick succession, but a direct hit to the goolies seemed to take the wind from his sails. The final over of the innings being less fruitful for our resident Kiwi, but nevertheless capping a fine 13 not out to finish. Mallards had reached a rather splendid 128 for 2 off 20 with 88 runs from the last 10 overs.

A quick Tina turn a round and the Mallards were set up in an aggressive stance on the field. Andy Dunhill opened the bowling from the Tree end. Despite jibes of a four and three from their opener Krishnan, a fine delivery edged through to Beacock was held and elated the field. Yet Gareth Taylor’s digit was nowhere to be seen. Presumably it was in his pocket as he was at square leg. His fellow umpire couldn’t be persuaded by the swoons of the Mallards, writhing with the knowledge a catch does indeed equal a wicket. It was not given though and The Mallards would have to crack on regardless. Beacock, in particular, would have cause for regret. Yet there would be even greater bewilderment from the apparently qualified umpiring that would follow.

At the other end Watson helped to steady the ship with a couple of tight overs. A swinging delivery was nicked but evaded Beacock’s big hands this time. The Excelsior batters were looking lively and matching the 6.45 per over run rate required for victory.  Yet Dunhill help to stem the flow of the batsmen with his last two overs and would finish with figures of 22 for 0 off 4 overs. Very decent.

McGuiness stepped up knowing wickets would be essential. There was to be no doubt for McGuiness’ first – spooned high into the field and caught by Gibbons at long on. But he knew it wasn’t going to be this easy. The Excelsior Batters were piling on the pressure and hoping to teach a lesson outside of the classrooms they normally inhabit.

The Mallards also had to contend with GT’s second innings transformation. From a slick ball counting secretarial vegetarian, his new experiential umpiring wisdom raised him to a Zen like state of connection with Mr Extras.  Together they redefined the concept of a no ball and would no longer abide by the laws of cricket or logic. The corridor of uncertainty became the only safe haven to the bowlers as anything pitched outside of this was given as a wide.  Both no balls and wides would flow like wine. The Mallards were confused but happy enough that Taylor looked tranquil signalling at a level of higher consciousness throughout the second innings.

Despite this, Bateman took over from the ever reliable ‘Doctor’ Watson (0 -14 off 4) and bowled Bodley early doors for 9, the Batters now requiring 80 odd from the 10 overs remaining.

McGuiness found his mojo in his decisive third over, taking out Birell and Jobling with a couple of peaches. The Mallards were cooking on gas. Oodles of dot balls from Bateman and the wicket of Mr Spencer would help to quash the Excelsior charge. Bateman would finish with a remarkable of 3 for 2 off four overs.

Alex ‘Jeffro’ Thompson’s deceptive ‘you think it’s a wide then it’s a wicket’ approach almost paid off when another edge through to Beacock was dropped. He was then agonisingly close to catching a second edge through from Thompson- it would seem the slippery mitts were letting down the normally safest of hands – forcing him to wear the gimp mask as punishment (see above) seemed a trifle harsh. Thompson would finish with 0 for 26 off 4, but deserved better, though Moran’s eager fielding had undoubtedly helped to curb the running total.

In his final over, McGuiness added another lamb to the slaughter with his fourth wicket, Tiffin the sacrifice. Again clean bowled, again McGuiness. Again the temperature rising.  He finished with 4 for 24 off 4. Bateman burnt down the house with his final wicket, finishing off Excelsior for 102 for 6 off 20. Mallards registering a second successive victory by 26 runs. Friday Night fever was upon us.

Excelsior, gracious in defeat, chipped in for the pitch costs and whipped out a bin bag full of a range of sandwiches. Corned beef, ham and tomato and cheese and onion were all there to choose from.

Post match boozing at the Welly helped to cool things down and the chat consisted of which sandals and factor suncream to pack in the bags for a trip to the beach on Tuesday. The Mallards would face Kings School Old Boys at Priors Park in Tynemouth.