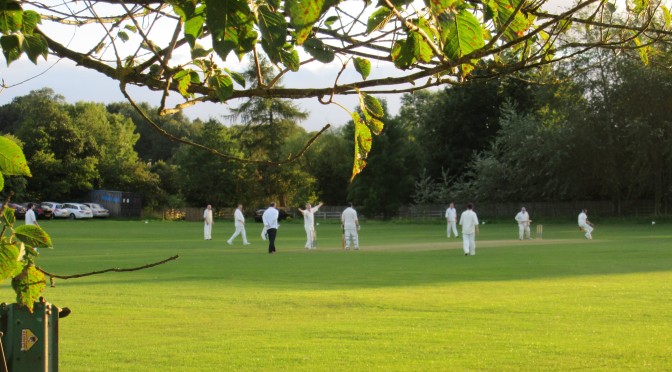 The laws of gravity have entertained and constrained mankind’s endeavours ever since cavemen hurled rocks at woolly mammoths. Sir Isaac ‘Beefy’ Newton characterised these laws as the mutual attraction between two globes in space; Alfred ‘Nobby’ Einstein formulated them in his general theory of relativity and Stig ‘Norwich’ Butcher struggles against them every time he gets out of bed. No better entertainment can be had, however, than to watch assorted members of the Mallards pivot about the greensward in their attempt to dispute gravity and dispatch cricket balls to all parts.

And so the game began. It started well: blue skies, bright sunshine and the pitch at Tynemouth inviting to behold – dry, verdant, with boundaries framed by assorted shrubbery (of which more later).

King’s Old Boys sportingly opened the bowling with some generous pie-chucking to which Stig duly applied himself – putting more beef into his batting than in Delia Smith’s hamburgers.  A brace of fours were retrieved from the shrubbery.

Going for the same recipe eventually brought his downfall, however. Stig picked out one of the few fielders who could catch. So the bustling McCaffrey joined the fray and he and Wood continued the bright start, each dishing up boundaries seemingly at will.

A change of bowling was called for. It was then that Captain Stig understood the opening request from King’s that we play 16 overs with a maximum of 5 per bowlers. What? This is not the way the Mallards do things. Evidently our opponents lacked quality in depth but possessed a couple of ringers. Well quality in depth is the hallmark of a Mallards team (well, quality of beer appreciation) but the only ringers are on our pensioners’ trikes. We held out for 18 overs and resolutely stuck to our principles of everyone getting a bat or bowl – 4 overs max for us.

McCaffrey perished first ball from incomer Black, and this despite early warnings from his partner at the non-striking end. For the next three overs, Black continued to subdue Wood and Gibbons and then the latter perished lbw going for a big swipe off Willet. The free flowing run-getting had stalled. Lucas came in and stuttered at first until Black finished his five overs then the pie chucking resumed and the Mallards returned to swinging the willow. Wood was caught for 11 trying to up the run chase and was replaced by Beakers who, together with Lucas who top scored with 20, saw the 18 overs out for a total of 76 for 4. Not the easiest score to defend.

Time for the Mallards to field. It started well, again. Cleaver and Browne bowled tightly, the ball was swinging and they got a wicket apiece: Singh playing-on and his replacement, Devlin, being caught. Lucas, meanwhile, distinguished himself at point, by stopping every ball that came his way. (Wood was not quite so distinguished – grabbing handfuls of turf rather than picking up the ball…) King’s were in trouble at this stage. Until, that is the penultimate ball from Cleaver which Malik hooped up into the air and into the brambles for a six. This drew blood from Cleaver whose arm was shredded in retrieving the ball and who would have gladly drawn blood from any further batsmen, had he been given a fifth over like the opposition. But that is not the way the Mallards do things.

Thus Watson and Thompson joined the attack. This is the way we play. Variety was the keynote of their assault: a number of wides occurred in the first over of each, but none wider than the Tyne estuary and Thompson was all the time clearly working on bamboozling his opponent since he clean-bowled the dangerous Malik in his second over. However, Van Zyl and Weston were now at the crease and they set about smiting the cherry. The shrubbery saw much action. Dunhill was added to the Mallards attack but despite removing Weston lbw, the damage was done. King’s reached 76 in the 16th over and finished with a boundary off the next ball to total 80 and win the game. Oh well…with different rules and King’s giving all their fielders a game the outcome might have been different.

And so to the ‘beer garden’ at The Lodge. Not the prettiest of back yards but gravity saw us all happily seated, the beer flowed, as did the lively conversation. That is the way the Mallards do things.