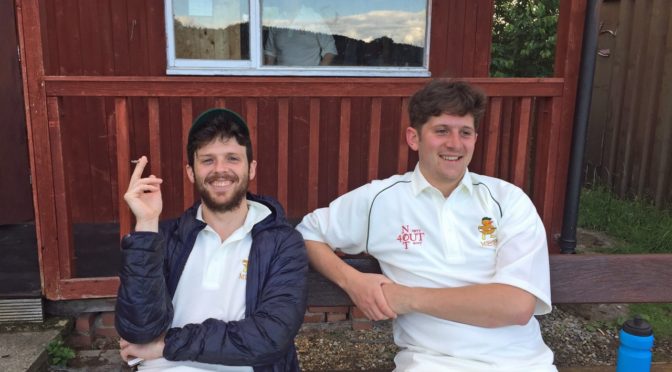 For several season Mallards CC has been like one of those 40-something MILFs you see hanging around in World Headquarters, desperately needing an injection of youth before they forget what their equipment is for. Whilst the will and the knowledge of what’s required has been there, the energy, vim and vigour has been sadly lacking. But not any more.

This season the Mallards Cougar Club have found the young blood they needed and the change has been remarkable, renewed energy, running power and stamina abound – possibly due to the extensive pre-match exercise routines the youngsters have insisted upon – see pic above.

The regeneration has not been without a downside, a certain inconsistency of performance, occasional lapses in concentration and some difficulty in holding a bat whilst desperately clinging on to their latest I-phone, but overall the experiment has succeeded, the fielding improved immeasurably and less discussion in the bar afterwards about the merits of poor to middling 1970s soft rock acts.

Unfortunately others have noted this success and aimed to match it, not least Excelsior Batters, an always friendly, well-matched, school-based opponent who last night took advantage of a greater access to such youth by fielding several fresh-faced six-formers.

Captain Butcher, winning the toss, decided to copy last week’s winning tactic of putting the opposition in and chasing – a decision that bore early fruit when the skipper himself pouched yet another catch for his portfolio, Ali trying to over-hit a good-length ball from Galloway.

Sadly, one of the perils of youth appears to be an inability to keep a good scorebook so details of partnerships, falls of wickets and scores after each over in the first innings will be purely imaginary. Maybe we should look at introducing the use of an ‘App.’

The other opener, Haggie, was unfortunately quick to get into his stride, taking particular advantage of anything near his legs and regularly peppering the pavilion boundary. New batsman and opposition skipper Krishnan also began well and the score began to creep up – let’s say 30-1 after six overs for want of anything actually written down.

Both the opening bowlers, Browne and Gilloway had started well but both suffered a little in their final overs, as 20-odd runs were added before, from the latter’s final ball, Krishnan aimed a shot in the general direction of the moon.  Wood, at a short mid-off, stared up at the increasing rainfall, waited patiently, checked his watch, had a chat about Existentialism with Lucas at point, smoked an imaginary cigarette and then, eventually, when the ball broke back through the earth’s atmosphere pouched the catch, leaving the opposition on 50-2ish after 8 overs. At this point the rain seemed to get even worse and both sides trooped off for a five-minute break.

On their return, skipper Butcher, showing the wisdom of his age, ignored the desires of some of his ageing bowling options and stuck to the younger brigade, calling forward Thompson and Gibbons and the latter struck in his first over, bowling Jobling for 6.  At the other end Haggie had continued to bat well and at some unmentioned point retired for 30.

Thompson, after a slow start, found his groove and put a brake on the scoring rate, conceding just six runs from his second and third overs before Gibbons struck again, bowling a beauty which bounced and jagged back in to clean bowl Barrett for 9 leaving Excelsior on approximately 85-4 from 14 overs.

Unfortunately, this brought a new, younger batsman to the crease in Mir and he played fluently from the off, crashing two fours from Gibbons’ last over, despite which the bowler finished with a fine 2-22 from his four overs, Thompson finishing with a very decent 0-19 from his four.

Finally the veterans got their chance as Mexter and Nitsch were brought on to finish the innings. Mexter looked to have struck in his first over when Bodley carved the ball high in the air towards a nearby rainbow. Wood, again, waited calmly as the ball returned to earth and again pouched the ball – then dropped it. Any suggestions that the torrential rain had reduced the ball to a bar of soap were, like some of the scoring stats, purely imaginary.

Fortunately the drop didn’t prove too costly as two balls later a terrific piece of fielding by Gibbons and the quick reactions of bowler Mexter ran Bodley out for 9 – credit should go to the batsman for his super-sporting gesture of accepting the run out with the umpire nowhere to be seen (an umpiring lesson that Gibbons should have taken notes from – see later). At the other end, though, Mir had continued to press on and somewhere around this point he retired on 31.  Nitsch and Mexter finished things off well though, restricting the batsmen to singles in the last two overs as Excelsior finished on 124-5 – normally a par score but, given the conditions, probably better than it sounds.

Hall and Wisbach led the Mallards response but their desire for a fast start was thwarted by opening bowler Glenwright who began with two maiden overs.  Realising the need to up the pace, Hall managed to find a boundary at the other end but in attempting to find another was undone by a very low bounce and bowled for five in the fourth over. Wood joined the fray with Mallards already behind the required rate on 10-1 from 4 overs.

Wisbach was the next to go, chasing down a second run and, according to the square leg umpire, Gibbons, coming up slightly short.  One of the perils of youth is not to have developed the various excuses you can make up for not giving your team-mates out (the sun was in my eyes, one of the fielders blocked my view, sorry I was looking at my phone etc). Wisbach, to his credit, gave a brief nod of disappointment before wearily trudging back to the pavilion bringing skipper Butcher to join Wood with the score on 11-2 in the fifth over.

By this time the rain had stopped but the pitch had been reduced to a bit of a quagmire with sawdust all over the bowlers’ run-ups and deep holes around the batting crease. Batting was a bit of a lottery and, at first, the new pair struggled to move the score on and after 8 overs Mallards were way behind the rate on just 22-2, needing 103 from the final 12 overs.

Inspired by the energy of their youthful colleagues and the opposing outfielders they decided to step things up by running for everything. Suddenly the score began to mount as dots became ones, ones became twos, and twos became threes. Several pounds were shed and a heart consultant put on standby but it began to work. After 12 overs the score had reached 53-2 – even the introduction of the Friendly Fire nominee Dunhill failing to slow things down.  By now both batsmen were panting like the afore-mentioned MILF might have dreamed of but ignoring doctor’s advice they continued to charge up and down, even adding an occasional boundary. A further 23 runs came in the next three overs as victory changed from an impossibility to a remote possibility and then to a mere possibility.  Sadly, having added 61 in 8 overs, the pair were both soon to depart, Wood, caught by the keeper for a gallant 29 and Butcher retiring on a splendid 31 just a few balls later – a partnership of 66 having kept the game alive. Both batsmen then went for a long lie down.

Still, however, a nigh-impossible 42 was needed from 4 overs for victory. Excelsior had a last trick up their sleeve and brought back the two opening bowlers for our new batsmen, Nitsch and Lucas to face. With the light fading, and the pitch treacherous, it proved a mountain too high. Both batsmen swung hard but mostly missed, Lucas bowled by Glenwright and new batsman Mexter, being run out without facing a ball as Nitsch tried forlornly to match the running method of earlier.  Gibbons came in and hit a couple of good shots without reward as the innings finally came to a halt on 106-5, an honourable defeat by 18 runs.

A splendid turn out at the Wellington by both teams saw the many youngsters listening in awe at the feet of their elders as their veteran colleagues regaled them with tales of yore, of dinosaurs, dragons and highwaymen, trenchfoot, steam trains, black and white TV and Amstrad computers. A fine time was had by all, obviously.