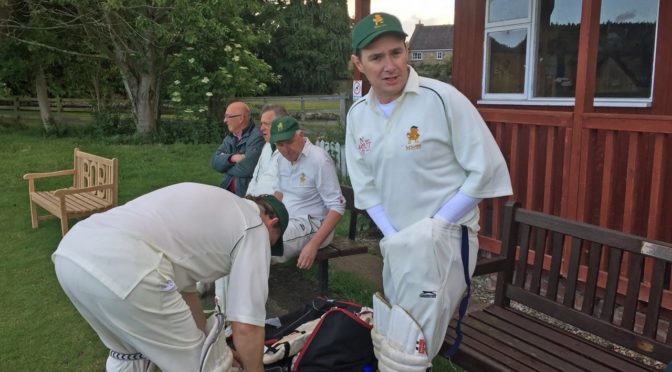 Days of monsoon-like rain and a lack of opposition may have led to lesser teams spending the night in front of the telly but not the Mighty Mallards. Riding Mill’s unique micro-climate, very own super groundsman Pete Nitsch and Hamid’s black book meant that we were able to enjoy a full 20-over game in remarkably pleasant conditions.

There is no such thing as a guaranteed win  – as Theresa May would find out later that very evening – but this election day dust up was as close as Mallards will get, as the late withdrawal of original opponents Ovingham meant that this was effectively Mallards v Mallards  (with a few of Hamid and Harry’s mates to help make up the numbers) so a minimum of 6 Mallards would definitely be on a winning side – welcome news following 5 straight defeats!

The window of dry weather obviously caught out some people as only 20 turned up to play but these were soon divided into 2 teams which just for convenience sake shall now be referred to as MCC and USCC and has nothing to do with the result (oops, spoiler alert!). Hamid very kindly offered to let one of the longer-serving Mallards captain USCC but unsurprisingly (to your current Captain at least!) this was politely declined so Harry stepped up to the breach and subsequently lost the toss to MCC Captain Butcher who chose to abandoned his tried and tested (and mostly losing) tactic of batting first by inviting USCC to bat.

Wisbach and Ankush opened the batting for USCC and got off to a steady if tentative start against some tidy bowling from Bateman and Thompson and some alert fielding (yes that’s right – alert!). 18 off the first 5 overs with just 10 fielders represented a great start for MCC.  Ankush started to find his range and punished Thompson’s 3rd over leading to the introduction of the evergreen Ian Stone or The Flashing Blade to use his official nick name (apparently!) Bateman finished strongly, bowling Ankush for 25 in his final over to finish with a very impressive 1 for 10 off 4 overs. Gibbons then took up where Bateman left off and bowled beautifully enticing Riswan to drive the ball straight to Butcher who took the catch despite looking like a rabbit caught in the headlights according to one team mate! Stone, sorry, TFB, also bowled nicely despite a lengthy lay off and took the wicket of Wisbach for 10 (all in singles) and finished with a highly respectable 1 for 18 off 4. Gibbons held on to a steepling catch off his own bowling to dismiss Harry, much to the relief of Wood, who despite complaining just moments earlier that the ball had come nowhere near him all night, seemed more than happy to let Gibbons take over! (Got to encourage the youngsters – Webmaster) Patrick finished with a great 2 for 14 off 4, leaving USCC on a meagre 64 for 4 after 15 overs. After some gentle cajoling from the Captain, Moran took the next over and while it is fair to say she took a while to find her line, finished the over well leaving Nitsch and Wood to close out the innings. Nitsch bowled Holland and had Hamid sharply stumped by Beacock for a well played 25, finishing with 2 for 9 off 3 – another great set of figures – bowling ones obviously Peter! Wood trapped Raheel in front and only slightly blotted his copy book by predicting his last ball would go for 4, which it duly did, but still finished with very respectable 1 for 5 off his 1 over. Mexter and Sailesh remained unbeaten as USCC finished on 100 for 7 off their allotted 20 overs – a great effort in the field for just 10 players and surely a gettable target, however regular readers will know not to take anything for granted – unlike Mrs May!

Shorn of any regular openers, Captain Butcher was forced to push himself up the order despite his recent terrible form and open the batting alongside Hall. It was clear from the outset that both batsmen had different targets, Hall to calmly accumulate the runs required to win and Butcher to simply survive his first ball, something he had failed to do in his last 2 innings! Hall was untroubled by USCC opening bowlers Sailesh and Mexter while Butcher avoided the ignominy of a hat trick of Golden Ducks by playing a solid defensive shot to rapturous(ish) applause from the Pavilion much to the bemusement of those unaware of the circumstances. Things were to (briefly) get even better for Butcher who managed to intersperse numerous dot balls with a couple of 4’s before a very fine edge to the keeper did for him, out for 8 and MCC on 13 for 1 off 3, just behind the required run rate. Wood then joined Hall and both batsmen played nicely taking the singles on offer and regularly finding the boundary so by the time Wood was (very) narrowly stumped off Rizwan for 16, MCC were on 49 for 2 off 8 overs with Hall on 20, and comfortably ahead of the run rate. Bateman (having checked the positioning of his box – see pic) then joined the fray and was clearly keen to get home to check out the exit polls as he set about the USCC bowlers and Raheel in particular with relish, hitting 3 glorious sixes in an over including one of (if not the biggest) six this correspondent has ever seen at Riding Mill. Hall was still steadily accumulating at the other end and both batsmen reached their retirement score (Hall 30 and Bateman 33) in the 14th over leaving a paltry 8 to win off 6 overs. A maiden from Ankush and some tidy bowling from Haylock delayed the inevitable but new batsmen Nitsch and Gibbons stayed calm and knocked of the winning runs at the end of the 17th over to complete an unusually comfortable victory.

As usual a healthy contingent headed to The Welly where those successful Mallards (tried with limited success) not to gloat in the face of those less successful Mallards! Thanks to club despot Taylor’s carefully worded fixture description, Mallards are able to claim victory and boost the seasons win statistics but in truth and fully mindful of the gut wrenchingly sickening cliché – cricket was the winner (as it was pretty incredible that a game was held at all), and there were no losers on the day – oops sorry Theresa, I forgot about you!