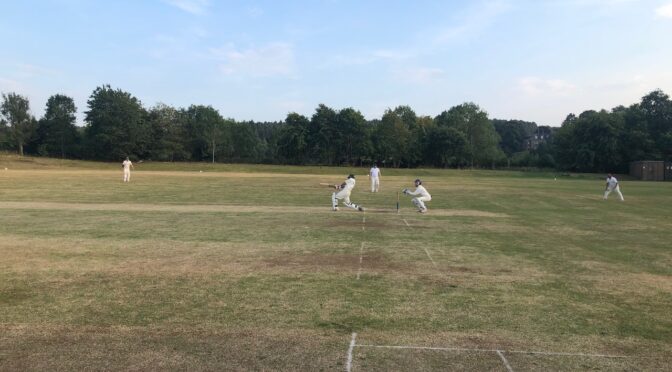 This story is based on actual events. In certain cases incidents have been changed for dramatic purposes.

A reasonably warm but partly cloudy evening greeted the Mallards at Newcastle City’s ground on the first day of June.

With a much changed team from the previous fixture of the week, the Mallards were in a relatively confident mood,  reminiscing over recent past wins against the opposition Davipart.

Mallards were batting first after losing the toss (I think we did anyway. Either way, we were batting).

In a change from the professional game, where the umpires are followed out by the players, Mallards like to start mind games early, by refusing to provide any umpires until the bowler, field and batsman are all set and ready. Only a cry from the opposition of ‘Can we have some umpires?’ allowed the release of the men in whites, as we didn’t have any umpire jackets or stones to count the balls. Psychological advantage was clear to see and we were well and truly one up over Davipart.

Malik and Singh were opening up and Thompson bowled a tight first over going for 3. The next over from Saif was equally  tight but then followed a turning point in the match. Thompson to Singh, big appeal for LBW, Peter ‘Dickie Bird’ Beacock raises the finger 6 for 1. Wood in next. A nice shot for 2 settled the nerves but then there was no need for the quick-fingered umpire 2 balls later as he was bowled. 10 for 2. Captain Butcher in next.

Malik was still looking comfortable taking a few singles and manoeuvring the strike to allow Butcher to face. Saif to Butcher, passes the bat. Keeper then throws the ball back to the stumps and there is a stifled appeal for a stumping. Denied by Peter ‘David Shepherd’ Beacock, play on. But what’s this???? Butcher is walking back towards the pavilion. Maybe he’s left something behind, like his box or the rule book of umpiring. It appears he’s given himself out as the wicket keeper was adamant his foot was out of the crease. (Even though there was barely a line to see). Possibly the first time we have seen a player overturning an umpire’s decision on a stumping. Controversially now 14 for 3 from 4 overs. Wisbach in next. Time for a bit a composure.

Malik negotiates Thompson’s next over, adding a couple more. The composed Wisbach facing up to his first ball. A wide one smashed straight to point – but put down!!! A single snatched from the jaws of a catch. Composure gone in the blink of an eye.

Wisbach and Malik continue to fend off the opening bowlers, running well and keeping the scoreboard ticking over to see Thompson and Saif off, almost. Saif’s last delivery was hit well by Malik but straight back to Saif who took a good catch. Malik gone for a nice 16. 31 for 4 after 8 overs. Thompson finished for a tight 4-13-2 and Saif just as good with 4-16-2. Beacock in next

In a rather precarious position Beacock and Wisbach showed how it should be done. Plenty of singles and couple of well-timed fours from each batsmen taking the score out of embarrassment and into poor – which most would have been happy with. The accurate bowling continuing with Dillon finishing 4-13-0.

A well-negotiated partnership of 33 came to an end after an in between over discussion was ignored by Wisbach. “We’ll see how this over goes and then have a thrash about in the final 3 overs” was agreed between the two batsmen.

But the loopy slow-paced Rawley was too tempting for Wisbach, who gracefully danced down the wicket and missed one that span about a meter (dramatisation) and was stumped. Wisbach gone for 22. Now 64 for 5. Mexter up next.

More singles and a cheeky run for a bye by Mexter added to the scoreboard. But then the famous Mallards curse was unleashed by Wood from the boundary. After Mexter snuck the extra, Wood was heard to shout ; “Well ran Leon” followed by ” he’ll probably get out now”. 71 for 6. Mexter bowled by Umar/Wood.

Big hitting Bateman in next. Beacock continued his fine innings with more singles and Bateman lit up the cloudy background with some lovely timing including a four and a big six off the final ball to take the total to 93/6. Beacock not out 15 and Bateman 12 from 6 deliveries.

Over to the bowlers to continue the Mallards fight. Gilloway and Thompson opening up with some well-bowled overs which,  apart from a few byes from a wide one down the leg, gave Mallards a nice start, against a clearly talented opening batting pair. Then the first strike, Thompson to Sandhu, LBW for 7. Davipart 11 for 1.

The well-known and dangerous Y. Rawley was in next. The field backed off a bit in preparation for the swinging blade. 2 boundaries followed from Rawley, tarnishing the over a little. The bowlers hit back well, restricting the batsmen to mainly singles with Thompson finishing 3-19-1 and Davipart on 36 for 1 from 6.

Then, the moment of the match. Gilloway to Duzza, a big hit over deep mid-off, Thompson went forward, then sideways, then back and back and back and leapt like a salmon in cricket whites, raising one hand and grabbing a ‘Worldie’ (as quoted in the scorebook). Great catch, Duzza done for 4, Davipart 37 for 2. Gilloway finishing with a nice 4-21-1.

Mallards sensed a chance and brought on Bateman and Mexter. Bateman kept the pressure on with some accurate pitched-up deliveries and was unlucky not to get a breakthrough. However, the runs began to flow at the other end with Rawley getting into his stride with consecutive boundaries from Mexter.  Bateman continued with accuracy and by the end of his third over had only gone for 7. Rawley continued to make runs and before long had retired for a well-made 33, with the score on 73.

Deeps entered and continued to add to the score with a boundary off his second ball and paddled around a few singles with Dillion to bring the score to 83 with Mexter finishing up on 3-0-29. Bateman ran up to bowl his fourth and Dillion was obviously late home for his tea, as he hit Bateman for 6 back over his head. A few more singles and some byes got the scores levels and then the final ball of the over was knocked for single to hand a deserved victory to Davipart with 3 overs to go. Bateman unlucky to finish on 4-0-18.

Mallards knew the poor start was the main contributing factor to an under-par score but realistically Davipart probably would have chased down a far greater total than that. We take the positives of a great catch and a few decent batting and bowling performances and move onto the next.

As usual the match was played in a good spirit and Mallards filled the bar with the main discussion being non-cricket-related. Which team had their shirt framed in the club house? Green and white hooped. Celtic? Sporting Lisbon? Yeovil? Even with Leon taking a closer look he was none the wiser. It remains a club secret to this day. . . . . . Not really, it was Gosforth rugby club who played at the ground too.