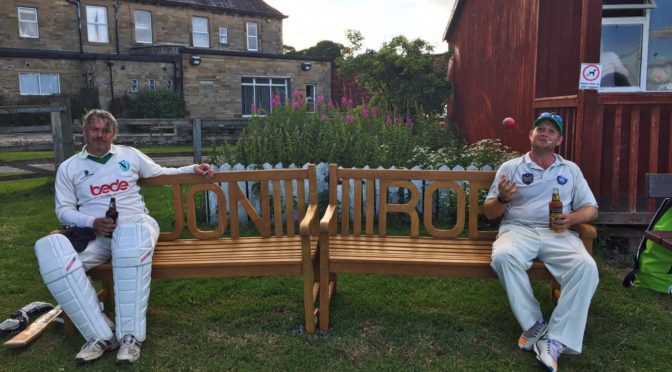 As almost a shoe-in for one trophy this season, your Club Despot has decided to see if he can make it a brace come the awards dinner in January, with a contribution to the match reporting. Which, it has to be said, has become a bit ragged of late with several defaulters still to submit their efforts after several weeks – not to mention any names but two that spring to mind share portions of their name with an American singer-songwriter and guitarist who died in 1997 (possibly best known for his cover of Hallelujah) and the mainland side of the Skye road bridge.

Following Mallards stunning 10-wicket victory in the first leg, it was always on the cards that Genetics would seek to bolster their side, ditching youth (D Taylor etc.) in favour of experience (any one of the Genetics XI who played!). Mallards in the meantime focused on their policy of just making sure everyone gets a game. Somehow also for this game, Taylor (G) managed to make just his 4th start of the season, but also reprised his captaincy role of old – mainly because nobody else wanted to do it.

Before things got started, however, there was a gathering at the one tree end of the field to dedicate two new, and finally installed in place, benches that the two teams have jointly paid for over the past seasons to commemorate  Jon Robinson. Sid Mitcheson fittingly led the dedication, having almost single handedly taken on the task of overcoming the collective lethargy that has been prevailing for almost 2 seasons for the clubs to commission and install them. It was also touching to have Jon’s mum and his daughter Sian (along with her newly-arrived son) in attendance. For those that didn’t meet Jon, he was a larger than life character with a tremendous eye when it came to batting and ability to take outrageous one-handed boundary catches (usually because the other was nursing a roll-up). Jon loved his cricket, and if he could get 7 days a week of cricket in during the season, he would, he played for anybody and everybody who would offer him a game. His main allegiances though were to Genetics first and Mallards second and we would always take priority. New year 2018 will mark 5 years since Jon left us too soon, and all of us who had the pleasure of knowing him remember him with fondness and still miss him. Consequently we’ve agreed that Mallards-Genetics games will continue to use the subs collected for charitable or practical cricket related donations – although it may take a few more years before we have the funds to build the Jon Rob stand at Riding Mill!

Onto the cricket itself. Taylor won the toss and elected to bat first, with agreement that the game would be 18 overs, max overs 3 per bowler (much to Cleaver’s dismay) and retire at 30. Kent and Mussett eagerly stepped forward to open the innings and were treated to some very accurate bowling from Taylor (B) and Tarbuck – making only his second appearance of the season for Genetics . With runs tight, both batsmen were made to work – Kent (I think) benefitting from an easy put-down by Buckley (who’d elected to play for the opposition). But it was Mussett who was the first to fall, bowled by a rare beauty from Taylor (B). Taylor (G) was in next with a determined glint in eye to secure a trophy that is surely his, by succumbing to a 3-ball duck, bowled by Tarbuck and ensuring that his season performance with the bat for Mallards will read 4 innings, 3 ducks and measly 3 scored. At the end of the 6th  over the scoreboard read 25 for 2 (thanks to two lots of 4 byes), and Genetics skipper rang the first bowling changes with Sid “the Slayer” Mitcheson replacing Tarbuck (3 overs 1 for 11) and Goulding replacing Taylor (B) (3 overs 1 for 5).

With Kent on strike, the game reduced to just two players, with the batsman determined not to get out and Goulding trying every bowling trick in the book to make it so. Meanwhile at the other end, Mitcheson got on the with job of taking wickets removing Latif for 1, who was quickly followed by Holland taking a suicidal quick single of his own calling – run out by the quicker running Bennett for the second duck of the evening. By the end of the 12th the score was 49 for 4, keeping the score rate at a smidgen over 4 per over.

Van Doorn replaced Mitcheson (3 overs 1 for 12) and Heslop, complete with bionic shoulder, replaced Goulding (2 overs 0 for 3). Kent having successfully navigated Goulding then proceeded to try to charge down a wide-ish one from Heslop and was duly stumped for 20 by an equally surprised Gardener – somehow managing to take a ball cleanly in his gloves for a change. Van Doorn, not wishing to miss out, then benefitted from a goal keeper-like full stretch catch by Buckley to remove Beacock for the third duck of the innings. With Wisbach and young Thompson at the stumps, things steadied and runs started coming, albeit helped by their plan to ensure that Mr Extras (21 – I think, the scorecard, as usual, not fully completed) would be Mallards’ highest scorer. However both made hay, until Wisbach contrived to pull a ball from Bullock in the final over straight into Gardner’s gloves – which somehow miraculously stuck. With two balls remaining Haylock, in at the dizzy heights of number 9 sensed a chance to improve his season average with a single off the final ball of the innings, leaving him on 1 not out, Thomson on a very respectable 12 not out and the innings at 84 for 7.

With not a lot to defend and Cleaver having already spent much of the Genetics innings polishing up the best of his two pink balls, Taylor elected to let Tony open up the Mallards’ defence from the Broomhaugh end with a tidy first over that saw just 3 runs come from it.  Haylock, buzzing from carrying his bat, opened from the now to be named “Jon Rob” end (the benches are a bit of a give away), was not so tidy conceding 7. With openers Gardner and Buckley stoically doing their job, and despite some good fielding, at the end of the 6th over Genetics were ahead of the run-rate at 32 for the loss of no wickets. Cleaver finishing off his allotted 3, and Haylock 0 for 16.

The first bowling change saw Wisbach replace Cleaver (3 overs 0 for 15) and Dunhill replace Haylock. With the ball coming out of the sun and extracting some turn, Wisbach bowled a tidy first over. Meanwhile Dunhill immediately found his line, troubling both batsmen, but with no luck. Wisbach’s second over saw Gardener retire on a well-crafted 30, to see Genetics on 60 from the first 11 overs. Dunhill finally got some reward in his last over trapping Buckley (24 – his score not his wishful age!) for a plumb lbw, finishing with figures of 1 for 13 off his allotted 3, which would have been 4 runs better if not for 4 overthrows from a slightly over-enthusiastic Mussett, seeing an opportunity to run the newly arrived Goulding out. The same said person, replaced Wisbach (2 over 0 for 17), and elected to bowl spin. Keeping things tight Ben conceded just 6 runs from his 2 overs, but by the end of the 13th the score was 70 and Genetics therefore only needed 15 off the last 5 for victory.

Electing to give everyone a chance, Taylor turned to Thompson to replace Dunhill. Tarbuck, in at number three, looked dangerous – until he was run out for 8 (book doesn’t record by who). However 10 runs came of Thompson’s over and, with 4 overs to go, only 4 were needed. Taylor elected to bring the field in. This tactic helped bag the wicket of Heslop, out for the fourth duck of the evening easily snaffled by Kent. With just 2 needed for victory and 20 balls to get it  Genetics, sensing victory, sent Jordon out to occupy the crease. Somehow he managed to get his bat on the first ball and was reluctantly forced to take a single by a screaming Goulding. One run needed, last ball of the 15th over and Goulding straight drove Latif’s last ball for four to see Genetics win the return by 7 wickets with 3 overs to spare.

Controversy then ensued, when Taylor present the Job Rob Cup to Genetics skipper Gardner at the Welly. Taylor quite rightly pointing out that at the end of the second leg Mallards were still ahead on net run-rate (and, I think, wickets taken). Cue setting up a decider next weekend in Wicklow! Third leg and all to play for!