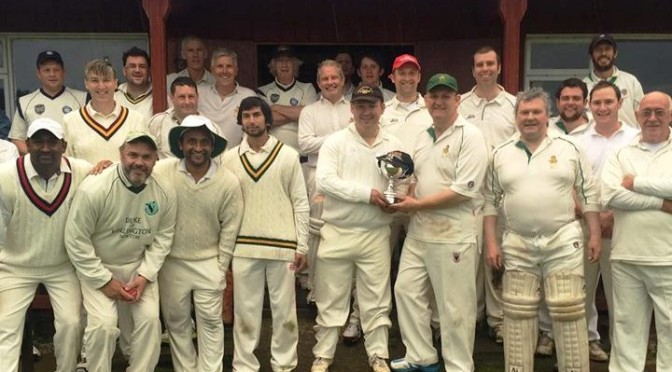 The year moves on, and with August comes the first El Classico of 2017. Enough has been written in previous year’s reports about the gravitas the Jon Rob matches carry, so I’ll not waste too much time on it here. Suffice it to say that one or two Geneticists were at the ground so early they were still striking their tents when I arrived.

Varying, often contradictory, predictions were offered about the weather prospects for the evening, but any fears proved groundless as the last of the grey clouds disappeared as the teams gradually assembled with none of the usual squabbling about who should have the Home dressing room. More pressing was the deciphering of the team selections, I’m not sure the eventual result matched any of the pre-game line-ups but who really cares.

Being so late with this report I can’t remember who won the toss, but for the sake of a good story let’s just agree that Stig did, chose to bowl, and move on. Taylor (D) and Hamid started things off for the Genetics, with Taylor not in any mood to mess around. Four overs later, with the score already at 40, Taylor retired on a sublime 32 which included six fours. At the other end, Hamid was trying to keep up but couldn’t find that same timing.

Things looked a bit ominous at this stage as the typically destructive Bennett strode out with purpose. Mallards needed a little something to help pull the game back their way a bit, and it came in not at all controversial circumstances as Bennett top-edged a legside full toss off Watson which was well caught on the fine leg boundary by Dunhill. This brought a bit of respite for the opening bowlers, Watson (3-0-18-1) and Dunhill (3-0-24-0), who were able to finish their spells in relative peace.

A bowling change brought another wicket as Hamid was bowled off Mexter’s second ball for 7. Mexter (2-0-4-1) and Bateman (2-0-16-0) fought to put us in front for the first time in the game, but Genetics’ number four Airey was going well and keeping things in the balance. Together with Jordon the score progressed through to 72/2 in the 13th over before Jordon was caught by Buckley off the bowling of Haylock (3-0-8-1) for 2.

Bowling well from the other end, Stone (3-0-12-1) picked up the wicket of Van Doorn for two, a sharp catch by Mussett in the covers. So by the time bowlers 5 and 6 had finished their spells, the score was 85/4 after 16 and we were in a decent position. Stig was still ringing the bowling changes as McCaffery and Mussett were brought on for the death overs.

McCaffery struck with his first ball (another excellent change, Skip) to end a strong innings from Airey (22), caught by Watson. McCaffery (2-0-13-2) struck again a couple of balls later, bowling Heslop for a duck. Numbers 8 and 9, Wisbach and Mitcheson looked to build a late rearguard action, before Mussett (2-0-8-1) had Wisbach caught by McCaffery for 10. The innings came to a close on 106/7 after 20 overs, definitely chaseable, but there were too many experienced Mallards out there for anyone to start getting carried away.

After a quick turnaround, Mussett and the newly promoted Bateman made their way to the middle and got stuck in at a frantic pace. At 19/0 after two overs and 32/0 after four, we were actually behind Genetics rate of scoring. However the openers powered on through with a wonderful display of strokeplay. No mercy was shown to the opening bowlers, Taylor (B) (3-0-27-0) and Mitcheson (3-0-28-0), as the ball disappeared to all corners.

At 59/0 after 6, Bateman won the race to retirement, his 34 containing two fours and three sixes. Mussett 6-4-4 in the next (and Wisbach’s first) over to join his opening partner in the shed, his innings of 33 containing six fours and a six, as well as a solitary single and a lonesome two. The score was now 74/0 after 7 and several people on both sides were struggling somewhat to come to terms with what they’d just seen.

The return fixture is just a few short days away and Genetics will no doubt be out for blood. I for one, can’t wait.