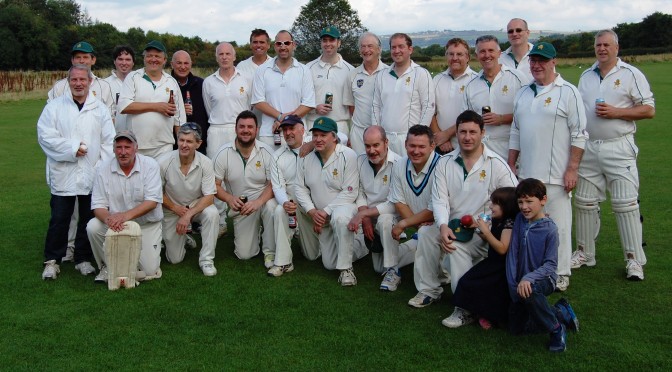 The first Saturday in September saw the final curtain on the Mallards season – the annual (weather dependent) end-of-season cricket festival.

This year the weather gods were benevolent and despite overnight rain the pitch, outfield and barbecue grills were good to go for a lunchtime start. An excellent turn-out saw a magnificent 23 players make an eventual appearance with further contributions from non-playing combatants, McCaffery, Page, and rather belatedly Brown.

Captains Wood and Taylor chose their respective teams, the Drakes and the Ducks, with the latter quite clearly Genetically modified. A two-innings 20-over match was agreed with a maximum of two overs per bowler and the batting line-up being reversed in the second innings, though Taylor latterly came up with his own version which seemed designed purely to keep Hunt away from a bat. 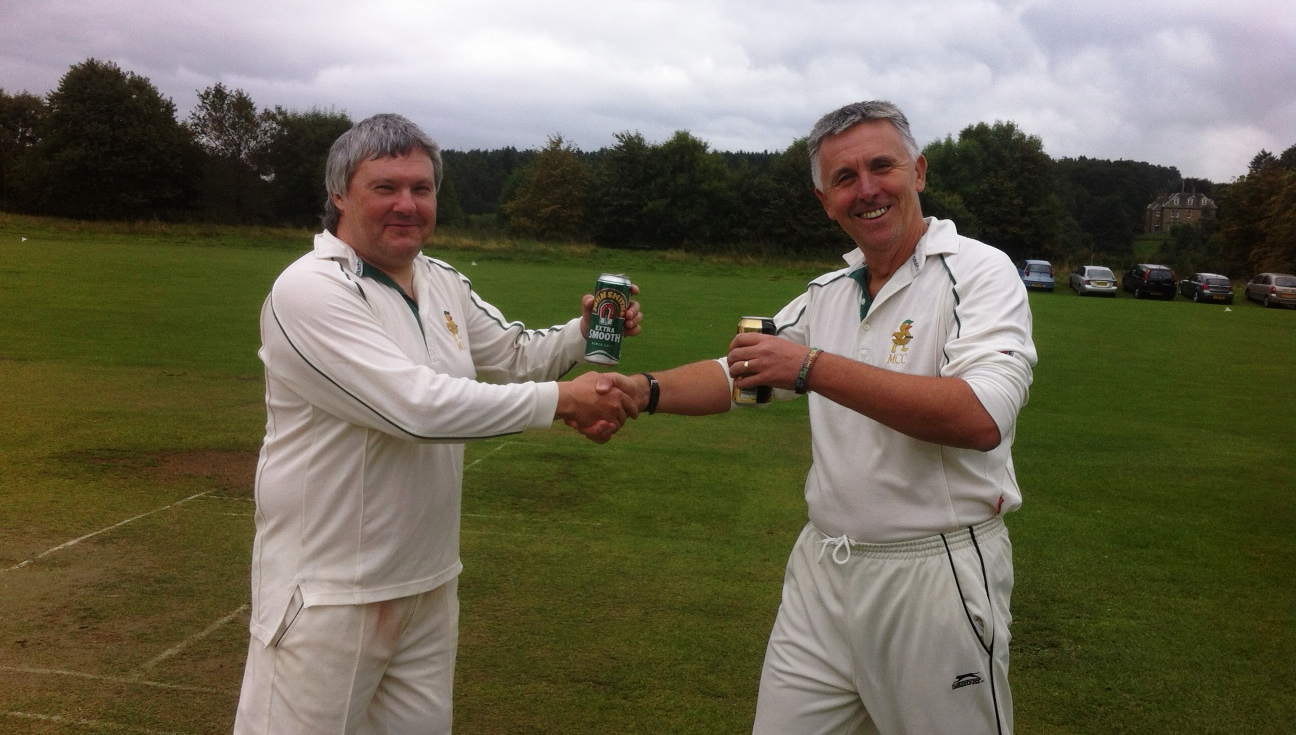 Wood won the toss and chose to bat, a risky choice as it gave his team first crack at the very fulsome beer chest. In an eventful first innings there were several highlights, not least of which was the rarely-spotted Scutt golden ball, which brought an immediate end to Haylock’s first appearance as an opening bat, an early blow compensated for by opening partner Scott’s unbeaten 27, though he may have been helped by the co-opting of spectator Butcher into the bowling attack – I bet Shane Warne never had to bowl in a pair of brogues on a slippery pitch!

The long-awaited return of the Mexter with an impressive 16 kept things ticking over nicely with only McChlery’s duck halting a solid middle-order showing with both Cox and Buckley also retiring on 25 and 26 respectively. Taylor then struck the first blow in the battle of the captain, a series of leg-side wides cleverly bamboozling his opposite number into a desperate slash as the first innings closed on a very reasonable 141-5.

The Drakes first innings began in frantic fashion, with an early six from Scutt and a flurry of 4s from Kent before Ducks opening bowler Mitcheson struck back by removing both batsmen as the score reached 38-2 in just four overs.

Further progress was a little more serene as Hall and Tenniswood both retired on 27 and 25 respectively, an advance only interrupted by Burt’ s early demise, Mexter’s fine throw from the deep running him out by a distance,  and after 12 overs the Drakes were nicely poised on 97-3.

Miserly two-over spells by Wood (0-5) Cox (0-6) and, in particular, Nitsch (2-6) brought Ducks back strongly into the game but just as it looked as if they might secure a first innings lead they were hit by Hurricane Heslop, whose very rapid 26 included two sixes and a four to take the Drakes to a very useful 148-6,  a first-innings lead of 7 runs.

A short beer break was then taken before Ducks were setting off again, Ramshaw and Mitcheson getting them off to a flyer as 32 were added from the first four overs before Mitcheson was finally removed by Kent, a surprisingly fine catch from Hunt, for a rapid 17.

Boyes joined Ramshaw and the excellent run rate continued to mount with the pair taking the score to 60 in just the 7th over before the latter retired for a splendid 25.  Wood joined Boyes at the crease, keeping up the momentum with some frantic running as the score raced on to 82 from 9 before Scutt’s golden first ball struck again, removing Wood for 12.

Drakes now seemed to have settled into a nine-an-over rhythm as both Buckley and Cox joined in the fun before perishing for 20 and 18 respectively, a momentum continued by Nitsch and Mexter, though the latter may have been fortunate to survive an early lbw shout from Heslop before crashing three fours and a six to cement his impressive return to the fray.

With Heslop finally removing Nitsch for 12, his second wicket putting him right in the frame for the man-of-the-match award, the Drakes innings finally came to a halt on a mighty 176-6, leaving Ducks requiring 170 for victory at precisely 8.5 runs per over

After yet another beer break the final innings commenced with Captain Taylor leading from the front, ably assisted by Gardner, the pair continuing their unbeaten stand from the end of the first innings.

They started brightly, with both batsmen finding the boundary, and despite some tight bowling from Mexter, just about kept up with the required run rate, reaching 46 without loss after just six over.

However, the retirement of both openers for 25 saw the runs start to dry up a little with Scutt failing to trouble the scorers, and with Scott, Nitsch and Wood all bowling tightly only 25 runs came from the next five overs to leave the Ducks on 71-1 from 11, the required run rate having gone up to a tricky 11 an over.

With Kent and Hall at the crease such a target wasn’t out of the question and the pair began to pick up the pace hitting 28 from the next three overs before Kent perished, Cox’s stumping given McChlery his first wicket in Mallards’ colours.

This brought the dangerous Tenniswood to the crease but after being hit for an enormous six, bowler Boyes struck back immediately, a second stumping for Cox removing the batsman for 8.

Burt had joined Hall at the crease as the match reached its denouement with the Ducks needing 47 to win from the final four overs from Mitcheson and Ramshaw.

Mitcheson struck first, removing the dangerous Hall for 23 and this success was followed up by his partner-in-crime, Ramshaw conceding just three runs from his first over to leave Taylor’s men forlornly looking at a target of 40 from the final two overs.

The end was nigh and with Mitcheson bowling another tight over it was left to Ramshaw to seal the victory in style, removing both Beacock and Jordan in the final over to leave Ducks adrift on 138-6, a 31-run victory for Drakes.

The victors celebrated gracefully with their equally gracious opponents after a match which had seen some surprisingly good cricket (given the alcohol intake), the perfect precursor to the main event: the food! A splendid barbecue completed the evening (special mention to Mr Cox’s rather wonderful home-made sausages) and the season’s celebrations were completed by the man-of-the-match award. This was a fiercely competitive field due to eight different batsmen reaching retirement figures and 12 bowlers taking wickets but ultimately Ramshaw’s second innings efforts of 25 not out and 2-7 at the death won him the much sought-after bottle of Prosecco.

Thanks to the many people who contributed to the day’s success, far too many to mention but you know who you are. Roll on next year!