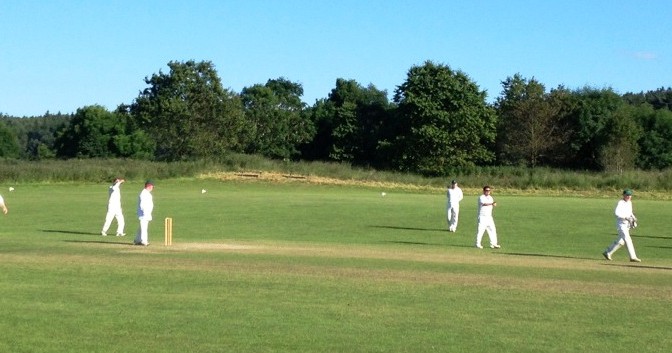 Following recent match reports I was going to begin this week by comparing the night’s events to the rise of right-leaning political parties in mainland Europe combined with an analysis of how this can be linked to Keynesian monetary policies but frankly I couldn’t be arsed, so…

A very pleasant summer’s evening saw Mallards make the trip to Burnmoor to take on a surprisingly youthful Architects side. Skipper Wood lost the toss for the first time this season and the home side chose to bat first. The home side opted not to have a retiring score for batsmen, normally an ominous sign!

The omens looked even worse when Dunhill’s opening over went for 10 runs, with two casually stroked fours flying across a lightning-quick outfield but thankfully both Dunhill and the other opening bowler Page soon tightened their grip, backed up by some sharp fielding to put a break on the scoring as only seven runs came from the next two overs.

Page was the first to strike as the dangerous Fenwick was given out lbw, much to the surprise of most of the players, especially the batsman, as the ball appeared to strike him high on the thigh pad. Taking advantage of this umpiring gift, Mallards managed to keep a hold on the scoring and after six overs Architects had reached 28-1.

The home team moved up a gear with the other opener, the left-handed Cox, leading a charmed life as several mishits fell into space and the next two overs saw a spate of boundaries as the opening bowlers finished their respective spells with Dunill ending on 0-22 and Page 1-19. The latter’s figures would have been improved but for a rare drop from Dickinson, who from then on looked intent on making an impact.

Scott and McGuiness took over with the latter striking immediately with his first ball, trapping Clinton lbw for 15, a more obvious decision than the first one but one that saw a rapid removal of the home umpire!  Scott was less fortunate from the other end and after two overs was replaced by Cox, who hit his mark immediately, Dickinson making up for his drop with a solid catch at mid-off.

Loach, meanwhile was pushing the scoring rate on with some good running and after 14 overs the home side had reached a respectable 84-3. Dickinson, still seemingly intent on compensating for his earlier error, struck again in the following over, running out the home captain Robinson with a direct hit. The umpire, taking evasive action, failed to give the decision but very sportingly Robinson accepted his fate and walked.

McGuiness finished his spell with steady figures of 1-23 but Scott’s return saw a rapid acceleration as Loach and newcomer Harkin picked off three boundaries to move the home side on to 121-4 from 18 and continued their attack, taking 10 off Cox’s final over (1-22 from 4) to leave on 131 with one over left.

Skipper Wood brought himself on to bowl the final over and managed to stem the tide a little, clean-bowling Loach as Architects finished on a decent but not decisive 137-5.

A new opening partnership of Hall and Heslop took to the field for Mallards but didn’t exactly gel as Hall perished in the first over, bowled for 0 to bring Dickinson to the crease a little earlier than hoped for. With Heslop struggling to pierce the infield the scoreboard was rather stationary and after three overs Mallards were struggling on 8-1.

Dickinson, however, was beginning to find his range and in the fourth over found a pair of boundaries to get things moving. He followed this with a huge six over the boundary wall in the next over as Mallards moved back into contention at 27-1 from five overs.

That, however, was the high point as Dickinson fell lbw in the following over for 23, Buckley was caught for 0 top-edging a pull in the next and, to complete three wickets in three overs, Heslop was caught in the eighth over as Mallards slumped to 37-4.

This left Wood and Cox at the wicket, but their attempt to resurrect the innings was cut short as Wood was harshly given out lbw to Robinson for 0 as the visitors crawled to 38-5 at the halfway stage.

Scott joined Cox at the crease but soon found himself back in the pavilion caught for 0 as Robinson struck again, McGuiness followed in the next over, bowled for 1 and Mallards again lost a third wicket in three overs as Cox, who had chipped away manfully for 14,  was bowled by Robinson, the bowler finishing his four-over spell with figures of 3-6.

Mallards batting had yet again subsided dramatically, a worryingly regular occurrence recently, seven wickets falling for 23 runs in 11 overs to leave them well adrift on 50-8 from 16 overs.

Beacock, struggling with the bat this season, soon perished for 1 and the innings came to its seemingly inevitable end when Page was run out in the final over as Dunhill at least tried to push the score along to leave Mallards all out for a measly 60,  77 runs short of the home side.

Beer in the clubhouse bar was of course a compensation and some very nice chips were provided by the opposition to restore spirits but with the decider against Durham coming up next week a drastic improvement in the batting department is somewhat urgently needed.