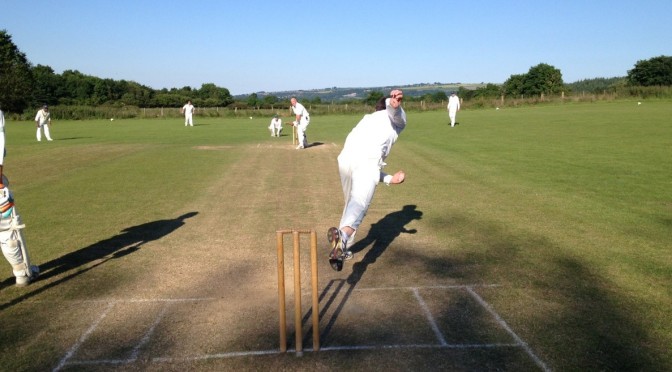 Following his disappointments the previous week, retired Professor and clinically diagnosed loon, Jack Bodell had managed to slip his carers and nip to ASDA where they had an excellent deal on a 3 times zoom compact camera for thirty quid. Perfect, he thought to capture the God particle from sixty yards.

Sadly for him, his carers were waiting outside the ground on Tuesday night and captured him. He was dragged back to his care home for an evening watching his “Best of Professor Brian Cox  DVD box set”. He missed the cricket and the World Cup but he was at least in safe hands.

Back at the ground the weather on the day was very much nagging just short of a length with heavy rain in the morning followed but a weighty shower at the start of play: the sort of “shall we? Shan’t we play?” type. Thankfully both sides were tough enough to take what the weather decided to throw at them.

The pitch, which has proved far harder and firmer than the perceived “Vaughan Williams” stood up to the deluge well with the odd ball still rising sharply off a length: but then Vaughan Williams liked nothing more than smacking an electric guitar in the privacy of his own home on the cellar floor. He could be just as fiery as the Riding Mill pitch. Indeed, late in life, after a night of heavy cheese consumption, the stodgy old composer experienced a night of disturbed and surreal dreams. Inspired by these he formed his own heavy metal band called “The Double Gloucesters”: There was nothing he liked to see more than a Lark Ascending sharply off a length.

Mallards won the toss and put Sparta in but faced using a very slippery ball. Sorry I should use the plural because the first was sacrificed to the neighbouring field during their innings.

It all started so well with Steve Hunt and Andy Dunhill keeping it tight for the first couple of overs. The final ball of Steve’s second over was thumped for four and this turned out to be a prelude to a series of decisive smacks to the boundary punctuated by a few respectful defensive shots. Both Andy and Steve bowled well even though the slippery ball was difficult to control. Their eight overs cost fifty seven for no wicket with the best hope of removing the batsmen being retirements on thirty which duly followed when Gibbs and Pentland replaced Rushton and North and the scoring rate slowed briefly.

It wasn’t long before Dave Cox and Srinath Perera were receiving similar treatment to the opening bowlers. Pentland was going particularly well and Srinath found controlling the slippery ball particularly tricky. Reward appeared to finally be coming Srinath’s way when Pentland, just short of his thirty lofted a drive to long on that was right down Alan Boyes’ throat. His hands gratefully accepted the gift with about as much softness as a golf ball bouncing off concrete from a great height. The chance was spilled but after just one smacked boundary later Pentland retired.

After sixteen overs the score had reached 126 for no wicket. Captain Stig turned to Glen Steele to stem the flow and chose to bowl the remaining two overs himself. The first two overs yielded more runs but Glen’s second over turned out to be the highlight of the day for Mallards. First he clean bowled Gibbs and then, Alan Boyes caught Pearson next ball to redeem his earlier drop. Next ball Cuthbert was caught behind with Pete standing up to the wicket: A most unlikely hat-trick and one to savour for Glen.

Unfortunately Stig final offer went for a few as Sparta finished on an imposing 153 for 3: well that’s what the scorebook said.

It was left to Steve Kent and Alan Boyes to open facing this imposing target but all went well for the first few overs with Alan quietly accumulating runs and Steve scoring more quickly. Both consciously picked out the volunteer Mallard fielders, filling in for Sparta, who were two men short. Despite some confused running by both openers there were few alarms as Steve soon reached his thirty. This brought hat-trick hero Glen to the crease. Alan, so often the cause of mayhem between the wickets got a taste of his own medicine as Glen called him for a sharp single. He could have shouted “no” but instead set off whilst blurting out an expletive before being run out.

At this point the momentum went out of the innings as Tony Jordan, in next, found it hard to make contact between bat and ball and Glen was uncharacteristically clean bowled for two. Tony fell soon afterwards for one and was closely followed by Pete for the same score, leaving the Mallards hopelessly adrift on sixty for four in the twelfth over. There was no realistic way back from there though Dave Cox certainly upped the scoring rate with some fine straight hitting, ably supported by Stig. With the score on ninety-nine from seventeen overs, Stig fell, caught by Gibbs off North for six. Dave soon retired leaving Steve and Srinath to play out the last couple of overs against Sparta’s best bowlers, with no real hope of getting close. They survived to reach 115, thirty-eight short of Sparta’s score.

Spirits rose at the Duke of Wellington with another fine serving of roasties and the breaking news of Brazil’s capitulation.

The evening that started in heavy rain ended bathed in warm, mellow summer sun light and chirruping birdsong echoing across the valley in a scene of transcendent, serene tranquility: Sounds like we’re back to Vaughan Williams. Why, you may wonder have so few heard of his heavy metal band then? Simple: they were shit.