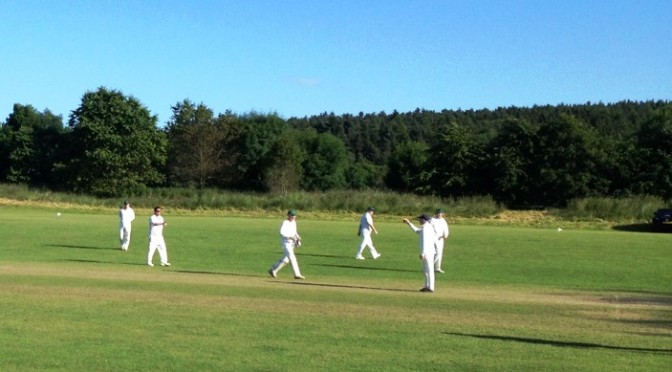 The Riding Mill micro-climate triumphed once again as Mallards and Durham Staff enjoyed another beautiful summer evening whilst torrential downpours washed away several nearby villages.

A late change to the Mallards team saw elder statesman Hayward make his season’s debut in place of the absent Boyes, a late drop-out that brought cheers from those who like to see the score mentioned in match reports.

Skipper Wood again won the toss and chose to field as Mallards sought to claim victory in the three-match series, having won the first game on the last ball and lost the second game with a collapse only previously replicated by the Roman Empire.

The return of Browne brought some much-needed fire to the attack and he almost grabbed his regular first-ball wicket, a feathered edge just failing to carry to wicket-keeper Beacock. Nevertheless a very tight first over got things off to a good start. Dunhill also found his line and length immediately as Durham struggled to get the ball away, only reaching 14 after 4 overs.

The visitors skipper Swift, however, was beginning to find some form and managed to inject more urgency into the batting as a couple of boundaries pushed the score along to 31-0 from six overs.

Manfully standing up to the increased pressure both bowlers fought back strongly with Browne claiming the first wicket, clean bowling English for 9 to finish his four-over spell with 1-17 and the luckless Dunhill conceding only two runs from his final over to finish with 0-16. After 8 overs Durham were struggling a little on 35-1 as new bowlers Cox and Taylor took over.

The former immediately found some nice pace and bounce but Swift was now well into his stride and managed to strike three quick boundaries to retire on 31 not out. At the other end Taylor’s unique range of deliveries had more luck as the batsmen struggled to work out what was coming next and could only find three singles.

Cox, responding quickly to an unusually expensive first over, took the second wicket in his next over, bowling Wrede for 2 and Taylor completed his initial spell at the other end as the visitors scrambled to 58-2 from 12 overs.

Durham’s new batsman Bell introduced himself with a beautiful clip for 4 in Cox’s next over and a second boundary from McGuinness’s first over as Durham looked to accelerate.

Cox, who had beaten the batsmen on several occasions without finding an edge, completed another fine spell to finish with 1-25 but Bell’s ominous-looking form was confirmed in McGuinness’s next over as he hit the first six of the innings, just clearing the fielder, but not the cars, at cow corner.

Taylor returned to keep things tight at one end but the assault on McGuinness continued with two more boundaries as Durham moved through the gears to reach 105-2 from 18 overs with Bell retiring on an excellent 30.

Up to this point Mallards’ fielding had been very sharp, with little escaping the fielders, but the pressure began to tell as mis-fields and overthrows crept in, ten runs coming from Taylor’s final over as he finished with a very creditable 0-22 from his four.

In McGuinness’s final over more runs leaked away as another pair of boundaries saw Durham complete their 20 overs on a decent but far from daunting 128-2.

Steele and Wood reconvened as the opening combination for the home side hoping to continue their run of fifty partnerships, broken only by erratic team selection, and got things off to a brisk start as the erratic Costello sprayed the ball all over the place.

With some quick running and a range of byes and wides Mallards quickly amassed 19 from the first three overs. At the other end the left-armer Boothroyd was bowling very tightly but Costello’s waywardness counterbalanced this and the opener was withdrawn from the attack after his third over went for 12 runs and Mallards  advanced to 33-0 from five overs.

The introduction of Bell livened things up as he found plenty of pace and bounce but most of this benefited the home side as the batsmen nudged the ball into wide open spaces or the wicket-keeper failed to stop some fairly rapid deliveries and after seven overs the opening pair had moved things on very nicely to 49-0, well ahead of the required run rate.

The next over saw even more acceleration as two more boundaries saw Steele and Wood claim their third opening fifty partnership and the score climb rapidly to 60 from just eight overs. Sadly, it also saw the demise of Steele, bowled by Boothroyd for an excellent 23.

Butcher came to the wicket to recreate the same opening three who began the previous win against the same opponents and started in brisk fashion with a crisp boundary. Unfortunately a pair of quick singles saw the newcomer tweak a hamstring and, wisely unwilling to risk the certain carnage of carrying on with a runner, he took one for the team, retiring hurt on 6.

This brought Buckley to the crease looking to build on his recent run of high scores (for Genetics!) and he and Wood kept things ticking over as Mallards reached a formidable 70-1 from 10 overs with just 59 required from the final ten for victory. Regular readers will know that this is no guarantee of success.

Meanwhile the left-armer Boothroyd had been replaced by the left-armer Boothroyd, who claimed to be the slightly taller twin of the opening bowler. This claim was ratified when he unveiled a much-longer run-up and a much brisker pace to further unsettle the hapless wicket-keeper as the byes mounted and the score reached 81-1 from 12.

The introduction of Metcalfe, however, did have the desired effect for the visitors as he highlighted the benefits of simple line and length and finally captured the wicket of Wood, well caught at fly slip for 20.

This brought Hayward to the crease for his first knock of the season, a brief visit as a combination of Boothroyd 2 and umpire Dunhill sent him quickly back to the pavilion lbw for 0. Seasoned Mallards watchers shuddered – would this be the start of another classic batting collapse?

As Cox joined Buckley at the crease the scoring rate slowed as they settled in and with Metcalfe continuing to bowl very tightly Mallards crept towards their target, reaching just 92-3 from 15 overs, still needing 37 for victory from the final five overs.

The pressure on the fielders, however, was also mounting and four overthrows, forced by Buckley’s quick single, and a crisp boundary from Cox only increased this as both batsmen began to find their form, to take 12 runs from Boothroyd number two’s final over. Metcalfe then finished his spell, an outstanding 1-13 from four overs, and an increasingly desperate Durham brought back the quickfire Bell for another spell.

Unfortunately for the visitors the introduction of pace again misfired as Cox, in particular, tucked in, two fine boundaries easing the home side towards their target as the returning paceman’s over went for fourteen runs.

With Mallards now sitting pretty on 124-3 from 18 overs, needing just five for victory, Durham skipper Swift gamely brought himself on to try and stem the tide but it was to no avail, four runs were swiftly added to bring the scores level before Cox drove the winning boundary to give Mallards victory by seven wickets with eight balls to spare.

Cox finished on a terrific 23 not out with Buckley adding a well-judged 17 not out as a very solid all-round team effort secured a well-deserved win and clinched a 2-1 triumph in the three-match series. Astute observers noted that the only defeat in the series came during a certain Mr Cleaver’s brief sojourn to England!

A full turn-out of both teams at the Wellington saw much celebrating from the home side and much potato eating from the visitors as the surprisingly lovely summer evening continued long into the night.