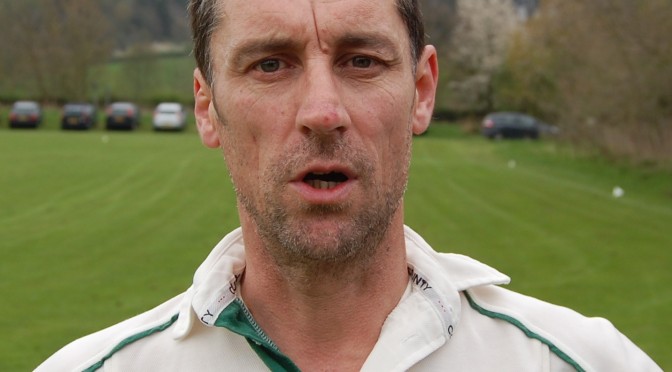 Ominous dark clouds greeted the Mallards as they finally got their season underway following last week’s pitch debacle with a home game against Excelsior Batters.

Skipper Wood won the toss and chose to bat while his batsmen were still able to see the ball. The two skippers agreed to be flexible on the number of overs, starting with 16 but looking to play 18 if the weather held up.

A new opening pair of Steel and Kent began the season steadily on a typically erratic early-season pitch with Steel in particular finding timing difficult.

Nevertheless they set the Mallards ship steadily on course, with Kent hitting a couple of solid boundaries, before Steel was caught and bowled by Langley for 7 with the score on 29 in the sixth over. Dickinson joined Kent at the crease and started unusually slowly with five dot balls in his first six before launching a ferocious attack on the unfortunate Shearer. After defending the first ball of the over he hit the next four for three fours and a six before taking a single of the last ball to make it 19 off the over, leaving Mallards well set on 54-1 from 8 overs.

Mallards fixture maestro Dunhill then appeared on the scene and with the opposition a man short joined the fray, fielding for Excelsior.

Another four in the next over helped propel Dickinson towards early retirement as he quickly reached 30 from just 16 balls to return to the pavilion and bring Cox to the crease. With Kent still steadily accumulating runs at the other end the score continued to mount rapidly until he too reached 30 with another boundary in the 12th over and the score on 81-2.

Last season’s in-form batsman Butcher replaced Kent as, with the weather and light improving, the captains agreed to make it an 18-over game.

Under instructions to try and move things on quickly Butcher perished for the cause, clean bowled by Woodhead for six, and he was quickly joined back in the pavilion by the incoming Nitsch whose brief innings was quickly closed by Langley, clean bowled for 1. Wood then joined Cox to see the Mallards home as they finally reached a very useful 111-3 from their 18 overs with Cox unbeaten on a steady 16 and Wood 6 not out.

Mallards took to the field confident of defending their impressive total with Wood taking over the keeper’s gloves from the unusually absent Beacock and Browne (pictured) opening the bowling and they got off to a flier. Excelsior opener Krishnan, whose fine reputation with the bat had been extolled by several fearful Mallards, carved Browne’s first ball to Taylor at a deepish point. With hearts in mouths the rest of the field watched as Taylor manfully held on to the sharp catch to send the illustrious opener packing.

No sooner had the celebrations died down when Browne struck again, his fourth ball an absolute beauty which cut in sharply off the pitch to smash Haggie’s stumps out of the ground and reduce Excelsior to 4-2 from the first over.

And Mallards weren’t stopping there, Hunt instantly found some swing from the other end, his fourth ball bamboozling the normally impressive Woodhead for one.  Browne’s second over then saw another beauty trap Shearer right in front of the stumps to leave Excelsior in disarray at 5-4 in the third over and it could have been even better if Nitsch hadn’t narrowly failed to grasp a sharp slip catch in the same over. This opposition had snatched victory against Mallards from precarious positions in the past but surely even we couldn’t lose from here!

Excelsior managed to finally settle things down with skipper Birrell playing steadily but their slow recovery was undermined again when Hunt found more late swing to clean bowl Lattimer for 5 and after two great opening spells they had staggered to 26-5 from 8 overs with Browne returning 3-17 and Hunt a miserly 2-7.

Taylor and Haylock took over the bowling and kept a tight grip on things with Taylor producing his usual ‘pearls amongst swine’ repertoire of the odd great ball amongst a scattering of wides and dead balls and Haylock hitting his straps immediately with a spot-on maiden.

One of Taylor’s pearls struck gold in his second over with Glenwright comprehensively bowled for one and though he then went for a couple of boundaries he found another one in his third over to dismiss the ringer Dunhill, smartly caught by Nitsch at something approximating short leg. With 13 overs gone Excelsior had been reduced to a mere 53-7 and Mallards were so confident of an opening day victory that Nitsch left the field to order the chips!

Taylor’s three-over spell had produced fine figures of 2-15 and the unlucky Haylock completed his four very steady overs with 0-17.

Nitsch returned to the field to take over at the tree end and in his second over he produced a fizzing delivery which startled the batsman so much he leapt back into his stumps, not just ‘hit wicket’ but ‘totally demolished wicket’ and with a Mallards victory in the bag Butcher was given the last over to complete an excellent win with some very good bowling backed up by some excellent fielding, Cox, in particular, impressing at both cover and mid-wicket.

Excelsior finally finished on 73-8 from their 18 overs, a comprehensive 38 run victory, with contributions from everyone and a great start to the season.

The delight continued at the splendid Wellington pub where the usual provision of roast tatties and chips was accompanied by a vast array of delicious roast beef and Yorkshire pudding. We must try and win more often if that’s what we get!