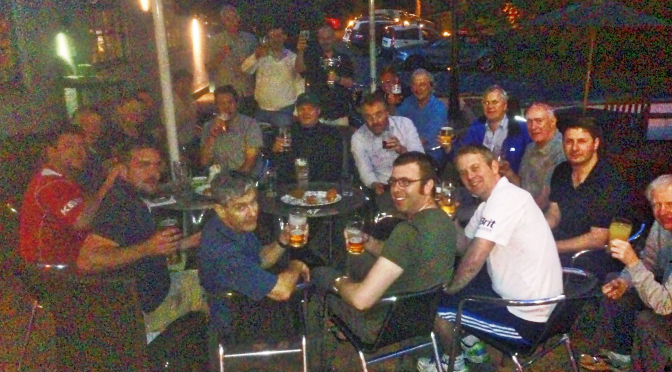 Tuesday 5th August was a momentous day in the history of these two great cricketing fraternities.  For the first time, we had a game abandoned due to heavy rain, the day before it started raining.  Such a bold decision to make, get it right and those responsible are rightly applauded, get it wrong and it’s Nasser Hussain at the Gabba in 2002 all over again.

The heavens opened on Wednesday, clearing the way for brilliant sunshine on Thursday, the new date for the first Old Firm clash of the season, with the prestigious Jon Robinson trophy up for grabs.

All (most) were at the ground on time to ensure a 6pm start, and captains Greenwood and Taylor strode out to the middle for the all important toss.  Taylor called it correctly for Mallards, and decided to bat first.  After the Lord’s pitch against India, it seems groundsmen up and down the country are now following in Mick Hunt’s (Lords head groundsman, and it’s definitely not Mike Hunt, definitely not) footsteps and preparing green pitches.  This one not quite as green as pure green, more of a mint green I’d say.  But still green.  Green.

Kent and Boyes opened for Mallards, with 1/3 of the three Taylors opening the bowling, Dan Taylor.  Kent was into his stride straight away, with two powerful boundaries and a couple of singles as well bringing 10 runs of the first over.  Scott reduced the damage a bit by bowling a maiden, and Taylor’s second over only went for a few singles and a no-ball. Scott’s second over not quite as good as the first, with Kent again finding the boundaries to take 10 off this over.  Captain Greenwood had decided to use 10 bowlers, with two overs each, so next up came Andy Jeffrey and Mike Gardner.  Andy only going for a single from his first over of ‘spin’ and Mike slightly unlucky to go for 7 runs from some good length bowling.  After 6 overs this brought the score to 38, with Kent now retired having made his 30 in double quick time.  Jeffrey managed to pick up the game’s first wicket, bowling Alan Boyes for 8, finishing with figures of 2-0-6-1, and Gardner bowled an excellent 2nd over, only going for a single.

Jordan and Scutt were the new men in, and sadly for Scutt, he was on his way back to the pavilion, run out without facing a ball.  After Gardner and Jeffrey finished their spells, Mallards had got to 44-2 after 8 overs.  Newcomer Andy McChlery was brought on to to bowl next, and the age old rule of taking pace off the ball worked a treat, Tony Jordan playing one behind square on the leg side, only to pick out Mitcheson who took a good catch, and a first Genetics wicket for McChlery.  We also welcomed back Gary Van Dorn into the team, and he hit a great line and length right from the start, bowling now to the dangerous Dickinson, who had been joined at the crease by Nitsch.  Gary managed to strike in his second over, removing Nitsch LBW for 3.

This brought in Dave Cox,  Mallards now had in their most lethal partnership, so Greenwood turned to an established bowler, and a part time bowler, with Mitcheson and Bennett stepping up for their spells.  Bennett’s first over of ‘pace’ was decent, only 4 off it, and Mitcheson bowled well in his first, but Dickinson and Cox still managed to put on 9 from the over.  Bennett’s second was to be his ‘spin’, going for 11, and a single boundary from Mitchesons second meant that Mallards had now gone to 90-4 after 16 overs.

The last two bowlers of the innings were to be Andy Goulding and Brian Taylor (rapidly running out of WD40 to put onto his knees after a long stint in the field).  Goulding found his first over tough, going for 7, but started to get back his control as the over ended.  Taylor struck with the 4th ball of his over, Cox playing an attacking stroke but getting a thick edge to Dan Taylor who took the catch.

The wicket of Cox brought Andy Dunhill to the crease, wearing a pair of pads that I can only assume he borrowed from Peter Crouch, these gargantuan pads reaching up to his hips, it was quite a sight. Goulding then pinned the Mallards down with a double wicket maiden, bowling both McGuiness and Perera, and with only a couple of wides from Taylor in the last, this meant that the Mallards innings closed on 104-7.

Before detailing the Genetics innings, I would like you all to read the following:

“Sledging is a term used in cricket to describe the practice whereby some players seek to gain an advantage by insulting or verbally intimidating the opposing player. The purpose is to try to weaken the opponent’s concentration, thereby causing him to make mistakes or underperform. It can be effective because the batsman stands within hearing range of the bowler and certain close fielders; and vice-versa. The insults may be direct or feature in conversations among fielders designed to be overheard.

There is debate in the cricketing world as to whether this constitutes poor sportsmanship or good-humoured banter.[1] Sledging is often mistaken for abuse, and whilst comments aimed as sledges do sometimes cross the line into personal abuse, this is not usually the case. Sledging is usually simply an often humorous, sometimes insulting attempt at distraction. Former Australian captain Steve Waugh referred to the practice as ‘mental disintegration’.”

All will become clear….

Genetics openers were to be Goulding and Brian Taylor, a lofty promotion for Brian, who wasted no time in getting his pads on….actually he wasted quite a lot of time, and the prospect of moonlit cricket became a real possibility.  Mallards were to open with Dunhill and Perera, who kept the first few overs really tight, Taylor displaying some beautiful forward defensive strokes and some swings of the bat without scoring, out of the blue, some sledging began, certainly not what was expected in a friendly game.

Goulding managed to strike the first boundary of the innings, and with Taylor’s 11th ball faced, he managed to quieten the sledgers for a short while with his first boundary.  Dunhill bowled with his usual control, and Perera was unlucky to have a massive LBW appeal against Taylor turned down.  The fact that Taylor hit the ball with the face of the bat mattered not to his sledgers, who were up with hands raised, with a ferocious appeal, not out said umpire Jeffrey.  Perera finished his spell, going for 14 runs, as Taylor and Goulding continued to stick in.  Cox and McGuiness were the new bowling partnership, with Cox starting with a maiden, and McGuiness striking with his first ball, removing Goulding for 8, caught by Scutt.

With the big-hitting Goulding gone, Taylor was joined at the crease by McChlery, still finding his feet in this game, he would have been sat waiting to be bat wondering what an earth was going on, would he receive the same treatment as Taylor?  Taylor, now (always has been really) the senior batsman, it was up to him to start to build some pressure on Mallards, and start to put some runs on the board, the boundary I mentioned a while back was to be his only one, as his runs arrived in singles and two’s.  McChlery stuck in well, but perished when Cox bowled him for 2, Greenwood now coming out to reassure his fellow batsman that the sledging would soon end, and to help his team build some runs.

The sledging ended, and Riding Mill fell quiet again, as Cox bowled Taylor for 14, 14 off 38 balls, a strike rate of 36.  The sledging now needs to be clarified, it was purely from his Genetics teammates sat on the boundary.  Mallards didn’t need to say anything, as they heckled, jeered, and ironically applauded every delivery he faced.  We were also the ones who appealed so vehemently for his LBW dismissal, all good natured banter as the earlier definition of sledging says it is, and Brian took it well, Jon Rob would have been laughing his head off.

Greenwood and new batsman Van Dorn did manage to start accelerating the run rate, as we got up to the 5 an over needed, and managed to stay there, Greenwood in particular playing his usual array of cuts and drives to race to his 30 and retirement.  Mitcheson joined Van Dorn, and the scoreboard continued to tick over, with neither Nitsch or Taylor able to stop the singles, despite bowling some good stuff.   The singles were fine, but boundaries had dried up, meaning that although Genetics were up with the run rate, as we entered the last two overs, it was 12 runs from 12 balls needed.

Dunhill returned to complete his spell with his 4th over, and only went for 4 runs, but a couple of byes meant that 6 runs from the last were needed for victory.  Dave Cox it was to bowl it, a two from Van Dorn, a bye, and then two from Mitcheson meant that with 3 balls left, only 1 run was now needed, which Van Dorn dabbed into the off-side and the game was over.

It’s always great when a game goes down to the last over, and even better when it’s played in such a great spirit, with every player on both teams involved in the game.

No game at Riding Mill is complete without a trip to the Wellington, with a full crowd gathering around the roast potatoes, Yorkshire puds and gravy.

Of course, this fixture will never be just another fixture for as long as these two teams play each other.  Jon Rob would have loved every minute of this game, and we raised our glasses to our much missed eccentric, and enjoyed a great laugh after the game.

All of the match subs were used to help the fundraising for Riding Mill’s quest to install a generator, we’re sure JR would have approved [in fact we raised a total of £123 on the night, thanks to the obligatory domino card. Jon would definitely have approved of this method of fund raising – Ed.]

The anticipation is already building for the next fixture, thanks to all for a great game of cricket.

Man of the Match: Brian Taylor