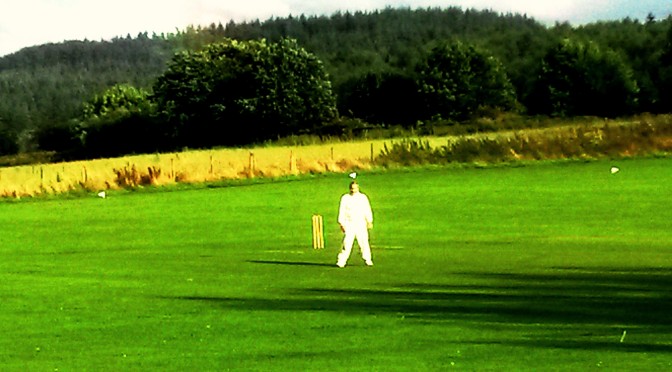 A combination of the Riding Mill weather dome and the sterling work of groundsman/catering manager Pete Nitsch meant that Mallards game against the Wallace Arms somehow survived the aftermath of Hurricane Bertha.

As is their normal m.o. the Wallace Arms turned up in dribs and drabs, eventually culminating in nine or ten players depending on who was counting.  With 13 Mallards in attendance Messrs Lucas and McChlery stepped forward to play for the opposition, perhaps having seen them looking impressive in the warm-ups!

After a short sharp shower delayed the start Skipper Wood again won the toss and with the opposition only boasting seven men generously put them into bat.

Regular openers Browne and Dunhill led the attack again and began well against a strong opening pair, the former proving frugal and the latter again desperately unlucky as a series of leading edges either dropped short of fielders or were just plain dropped. Kent spilled an early chance in the covers despite his confident call and Browne also put down a chance after making up a lot of ground and seeming to take the catch in the gully region before it somehow popped out again.

Despite the missed chances Mallards were managing to keep a tight-ish rein on the young openers and after eight overs the opposition were 39-0. McGuinness and Haylock took over those reins and started well but after their opening overs the visitors began to cut loose, 13 runs coming from the former’s second over and 18 from the latter’s, including two consecutive big sixes from retiring opener Wallace, who had somewhat fortunately survived most of the missed chances. The sudden surge of runs meant that the score had accelerated to a hefty-looking 83-0 from 12 overs.

Unfortunately things were to get worse before they got better as the retirement of the two openers had brought Bell to the crease and the batsman, remembered for clearing the A69 with one shot in the game at Haltwhistle, started with a huge straight six and despite the introduction of Cox and Nitsch continued in that vein in his short and sweet innings. Three more huge straight sixes swiftly followed before Mallards finally struck, Nitsch finding the edge of the big-hitters bat, stand-in keeper Wood taking the catch to leave the scoreboard showing 127-1 after 16 overs.

The removal of Bell allowed Cox to join the party and after having a huge lbw shout turned down he removed Hampshire and one of the many Swallows in quick succession, both comprehensively bowled.

McGuinness returned at the pavilion end but the procession of talented batsmen continued as Charteries and yet another Swallow kept the 10-an-over run rate flowing until the bitter end – though the former was fortunate to survive a direct-hit run-out from Kent, the umpire perhaps distracted by the desperate batsman wiping out wicket-keeper Wood with a flying helmet-led dive. After 20 overs Mallards were left facing a challenging 164-3 target.

Kent and Steele led the charge for the home side and got things off to a flyer with 21 coming from the first three overs, Steele in particular again looking in fine form, despite a mean hangover.

The first breakthrough came in the sixth over, Kent well caught at mid-on for 8 bringing the ever-enthusiastic McCaffery to the fray (pictured searching in vain for a pot of gold at the end of the rainbow). His loud approach and  frantic running induced a brief sense of panic in the young outfielders and some useful overthrows kept the home team in the hunt as they raced to 50-1 from 8 overs before a sharp stumping saw umpire Dunhill send him off to the pavilion for 8, chuntering all the way despite his protests receiving little support from the equally-dismissive pavilion umpires.

Scutt joined Steele at the crease and almost immediately crashed a fine straight drive for four. Steele then added another two fours to the total to retire on 32 and bring the in-form Cox to the crease at the halfway stage with Mallards sitting on a decent 63-2, amazingly 11 runs ahead of the Wallace Arms score at the same stage, though to refresh your memories the visitors then added 112 runs in their final 10 overs.

Cox began well with an early boundary but the young visitors were now hitting their stride and a succession of wickets fell at the other end. With remarkable consistency Scutt, Nitsch and then McGuinness all hit one boundary and a single before perishing for 5 and at the end of the 14th over the score had reached 91-5 (suddenly 18 runs behind the opposition’s position!)

Wood now joined Cox and with the latter hitting two big sixes the score climbed to 107-5 after 16 overs before his second six took him over the retirement score of 30 for the third time in four innings.

Haylock joined Wood at the crease but with the opposition’s opening bowlers returning to the fray he found it hard to get the ball away and the scoring slowed with a couple of freak injuries slowing things further. Firstly Wood was hit on the ankle by a leg-stump yorker (umpire Nitsch desperate to raise his lbw finger but thwarted by the lack of an appeal) and then two balls later a full-length ball took off and caught Haylock on the jaw.

In an eventful final over, an un-nerved Haylock was caught at mid-off for 3 and a heavily-limping Wood retired hurt for 10 as Browne and Dunhill came in belatedly and the innings ended on 124-6.

The Wellington saw an excellent turn out of 12 Mallards (the exempted McGuinness heading off to Cumbria) and a sprinkling of Wallace Arms lads (most of them wouldn’t get served!) as the teams feasted on the ususal roast potatoes and the unusual deep-fried Broccoli (or Broccoli Tempura as the more-middle class lads know it).