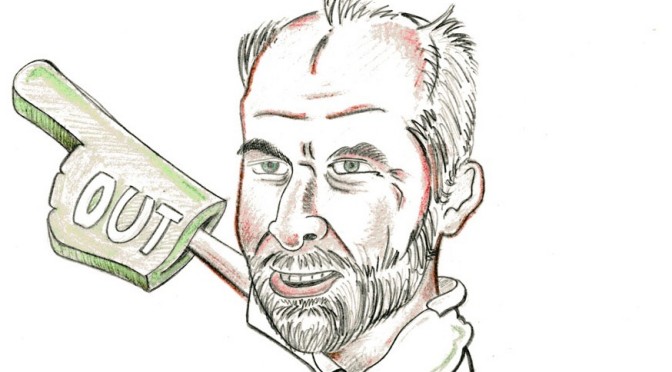 A rare lovely summer’s evening saw the return of Colombian exile Tony Cleaver (pictured above)  to the Mallards team as they sought to continue their positive start to the season against a rejuvenated Ovingham team.

Skipper Wood won the toss and chose to field in a game played under slightly unusual circumstances – 21 overs a side, 12 players a team and a maximum of three overs per bowler.

The returning Cleaver was given the honour of leading the attack and started steadily with just six runs coming from his first two overs. Cox at the other end was less frugal and was replaced by the ever-consistent Dunhill. Nevertheless the Ovingham batsmen were looking in ominous form and some fine straight driving, combined with some rather erratic bowling, saw the score mount rapidly and after five overs the visitors had reached 40-0 with Cleaver finishing his spell with 0-17

Dunhill then made his mark bowling the impressive looking Derrik for 17. Unfortunately this brought the even-more impressive Chamberlain to the crease and he continued in much the same vein. With Cox returning from the pavillion end and Scott replacing Dunhill (1-16) the score continued to mount rapidly and after 10 overs Ovingham were sitting pretty on 87-1.

Thankfully the introduction of the wily Wisbach put the brakes on as he took a wicket with his second ball, helped by a magnificent catch in the deep by McCaffrey to dismiss opener Drake for 23.   The bowler struck again in his next over with keeper Buckley grabbing a sharp stumping to get rid of Tate for 4.

With Scott proving expensive at the other end (two overs 0-21), skipper Wood replaced him and struck in his first over, McCaffrey again claiming another fine catch in the deep to remove Wallbank for 3.

The sudden flurry of wickets had slowed the run rate slightly as the scoreboard moved to 108-4 from 14 overs with Wisbach almost adding to his tally when McGuinness nearly held on to a fierce pull at square leg, stopping a certain boundary with his throat!  The bowler eventually finished his excellent spell with 2-20, his figures only marred by two late boundaries as incoming batsman Stewart found his range.

Wood also suffered from Stewart’s rustic hitting, going for two big sixes to finish with 1-25 from his three overs as the visitors regathered steam to surge to 146-4 from 18 overs despite Nitsch’s steady start at the pavillion end.

McCaffrey’s only over produced just five runs but in the final over Nitsch’s fine figures took a bit of a bashing as 15 runs came from it and the visitors reached an intimidating 169-4 from their 21 overs.

Having chased down 150 already this season Mallards hopes remained high and Steele and Wood, the same opening pair who began that run chase, again began well with Steele, in particular, playing beautifully as they reached 36-0 from just three overs.

The score continued to mount rapidly as Wood brought up their second consecutive 50 partnership in just the sixth over. Unfortunately, with Steele on the verge of a well-earned retirement, umpire Taylor (boo!) sent him back to the pavillion with a badly-timed but probably right lbw decision.

Dickinson entered the fray and was soon into his stride with a six and a four as Mallards continued to keep up with the challenging run rate, reaching 75-1 from just 9 overs. It seemed that luck was with the home side as umpire Taylor (hurray!) shouted ‘no ball’ moments before Dickinson missed a heave at Hall and heard his stumps clattered. Unfortunately the very next ball was an action replay (but without the no ball call) and Dickinson returned to the pavillion for a rapid 13 with McGuinness joining Wood at the crease.

Dickinson’s demise heralded the usual mid-innings crisis as  Wood was bowled for a solid 19 followed immediately by McCaffrey, dismissed first ball in identical fashion. McGuiness followed suit in the next over, caught at point as Mallards stumbled to 95-5 from 12 overs, slipping marginally behind the required run rate for the first time.

Fortunately this week’s batting line-up was stronger than usual and the new batsmen Buckley and Scott settled things down again and got the scoreboard moving with 25 runs coming from the next three overs but just as Buckley began to hit his best form he picked out Chamberlain, the visitors best fielder, right on the boundary and the youngster held on to a good catch at the second attempt to remove the batsman for 15. After 15 overs Mallards were 120-6, three runs ahead of the visitors at the same stage.

Cox now joined Scott at the crease with 50 runs required from six overs and the pair started steadily adding another dozen runs in the next two overs to leave things evenly poised with 38 needed from four overs.

Unfortunately Ovingham had now gone completely on the defensive and with 10 fielders in a ring around the boundary it was becoming increasingly difficult to score quick runs as first Scott (13) and then Nitsch (3) were run out trying gallantly to eke out every run.

A four from Cox just about kept Mallards in touch but with Wisbach unable to repeat his previous heroics the game was finally up when the former was unluckily bowled off his pads for 16 in the final over.

Cleaver belatedly joined the fray, adding a single as Mallards finished their innings on a gallant 155-8 finishing just 14 runs short of another great but ultimately unsuccessful run chase.

Disappointingly the opposition failed to show up at the pub (Mallards loanee Jordan excepted), possibly due to the Brazil game having just kicked off but the home side continued to display their dogged determination by managing to eat both teams allocation of roast potatoes and chips.