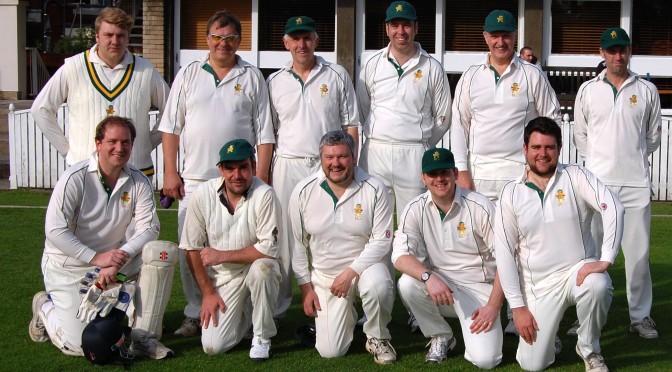 Match reporter: Alan Boyes (you might have guessed this)

Chaos theory suggests that the merest flap of a butterfly’s wing somewhere on the opposite side of the globe could trigger a chain of events that might be monumental and cataclysmic. Given the interconnection of all things in the Universe (that’s the kind of quality scientific and philosophical point of view you’d expect in a Mallards match report) there is a certain sense in that.

Last year’s summer had led to a boom in the butterfly population, boosted by long glorious endless days of warmth and sunlight. After so many cool summers and long winters it was finally time for them to venture out: a time to play; a time to make new friends; find love, romance and generally flap their wings a lot.

With so many of them now ready to brave the first rays of summer sun this year the two teams took to the field at Heaton Medicals Ground, totally unaware of the momentous events unfolding – or unflapping – just outside Banbury in Oxfordshire. These first tentative flickers of summer heat as the summer sun shone benignly upon the richly coloured meadows. The last lazy hum of collected flies and bumblies with a scented breeze proved a heady mix for one solitary, yet frisky and amorous male butterfly who had caught sight of the most beautiful female he’d ever laid eyes on. Without a moment’s hesitation he said to his self, “she’s the one! We’ll settle down together, start a family, get our own place, buy a nice car, spend our holidays in Reykjavik and argue over whether to get a conservatory.”

Love was in the air around that apparently tranquil rural idyll. More serious matters, however, were taking place in the depths of Heaton where the Mallards were seeking to build on an encouraging early season. Sparta came along with other plans.

A brilliant, sunny evening greeted the two sides and it was good to see that the Mallards had a full squad, allowing a debut to Andy McChlery and a rest for Trevor. Stig was captain and proved initially to be a hopeless tosser with not a penny to his name. In fairness the Sparta captain suffered a similar deficiency so they tossed the bat instead. Stig lost and the Mallards were forced to bat first.

Initially all seemed well with Steve Kent and Alan Boyes making decent progress in the early overs. The bowling from David Luiz at the top end was a bit erratic but runs flowed, reaching 19 for no wicket after three.

It was at this point that the vigorous activity of the butterflies set off a chain of events that had rendered the powerful Mallard batting line up completely useless. Alan Boyes decided to play inside the line to an innocuous straight ball from Pentland and was quickly followed by Stig and Mark Buckley leaving them at 20 for 3 against some gentle bowling. True it was a two paced pitch with many balls keeping low but it was hardly a minefield.

Colin McCaffery joined Steve and quickly built some fresh momentum with some helpful bowling: that amorous butterfly was getting to Sparta’s bowlers too; but just as they were accelerating it was time for Steve to retire, having reached thirty and his replacement, newcomer Andy McChlery fell quickly for nought, stumped.

This deflated the inning somewhat but Colin continued in pugnacious fashion, building a recovery only for the amorous butterfly’s over activity to set off yet another spiral of calamities as first Colin fell, quickly followed by Pete, Stuart and then Tom, who fell to an underpowered lofted straight drive. His erudite response – that’s a brand of super glue – summed things up; “piss!!!” And off he trudged, lamenting the butterflies. It was 82 for 8 now: the only consolation was that there were still eight overs left.

It was at this point with, Tony Cleaver and Gareth at to the wicket, that chaos theory hit Sparta. Wickets became hard to come by; indeed pitching the ball anywhere near the stumps or below waist height proved too much for the hapless bowlers. Eventually the umpires took pity on the bowlers, taking a more relaxed view of what constituted a wide or a no ball: Well we all wanted to get home at some point and it was painful to watch. Would a stricter view have changed the result? Oh sod it we all wanted to get to the pub before closing time. The umpires were losing count of the number of balls to be bowled in these endless overs too.

All Tony and Gareth had to do was help the ball on its way if it every arrived anywhere near them. I say “all” but that proved too much for many of the earlier batsmen. The partnership steadily accumulated runs, reaching forty four before Gareth was bowled for five.

Steve joined Tony to finish the inning off on 137 for 9. This was one of Tony’s finest innings (21 not out) and Steve had provided the highest score off the bat (34 not out). This was dwarfed, however, by the extras stacked up by the befuddled bowlers, who similarly cursed the butterflies and their wretched chaos theory. The fancy hifalutin butterflies with their clever intellectual theories were cursed by all. There had been some fine batting highlights from Steve, Tony and Colin but not much to cheer about elsewhere. Well there was always the bowling to look forward to. And what better gift to your most senior player than to let him take the new ball having just played one of his longest innings.

Straight away Tony put the ball on the spot but wasn’t having much luck. Tom at the other end was little less consistent but still threatening. The scoring rate was quite slow but largely untroubled until Tony finally broke the partnership, trapping Pentland lbw for ten. This brought Pearden to the wicket, whose stance suggested he was more in need of time at the toilet than in the middle. He didn’t look like troubling the scorers until he swiped two less than cultured boundaries off Tony. The following over brought out his musical side: the sight of Tom running in to bowl, for reasons known only to him, reminded him of River Dance. Consumed with this image he was helpless to ward off the power of the medium of dance as he tapped his way through the most exciting moves from River Dance, skipping over a Yorker that clattered his stumps. The power of music is greater than the forward defence.

The scoring rate still lagged behind the required rate but the batsmen saw off Tony and Tom without further loss. Stuart and Gareth replaced them but despite bowling well were still picked off each over by the batsmen. Mallards were beginning to rely on batting retirements with the hope that the next man in would be less effective. Though Gareth finally dismissed Sparta’s number five the scoring rate began to quicken. With Colin and Stig taking the dubious honour of being death bowlers Sparta need thirty five off four with seven wickets left.

That lack of wickets gave them the leg room to accelerate further. Colin’s first over went for fourteen after a promising start and that left a much easier target for the final three, in which they could play for singles and pick the odd two or boundary. It seemed like they would coast to victory but even with many wickets in hand they found Colin and Stig’s subsequent overs difficult to get away. With two balls left the scores were tied and a good stop by Wisbach brought the result down to the last ball once again. Sadly, despite a solid inner ring of all nine fielders, a scrambled single saw Sparta limp over the line off the last ball.

The truth was that without some very generous bowling this might have been a very one-sided game but that would be ignoring the very generous Mallards batting where 137 was clearly below par against the Sparta attack. It’s only a game but the events that unfurled at the Heaton Medicals ground can only add to the clamour and groundswell of opinion for a mass butterfly cull.