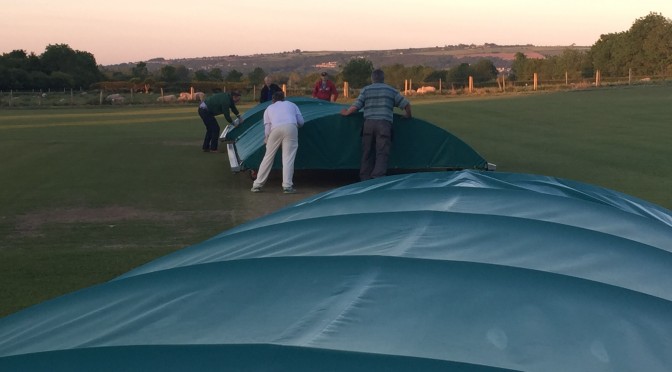 Being so early in the season, the annual MCC dinner and the lure of the coveted awards must still be fresh in everyone’s minds – catches are being held, match reports have been getting churned out in record time, and Tony Cleaver jumped at the chance to put in a strong bid for the friendly fire trophy. Regular readers will know this particular (award-winning) correspondent likes to take the odd pot-shot at TC, and it always proves popular so I thought I’d get it in way early. That’s ok, there’s no way Gareth will pick him for a while after last week, he’s kind of spiteful like that, so I can make those sort of jokes in safety.

However this is being the Mallards,  there was much midweek team shuffling. So when Captain Butcher turned up proudly wielding the new team kit, he was forced not only to welcome our new antagonist back into the fold, but had to hand him a brand new shirt into the bargain.

Anyhoo, that’s enough forced preamble – I usually like some sort of theme when I write reports, but I’ve been struggling this time (I’ll just call it ropey early-season form and move on) so am writing any old bollocks to get the word count up.

Facing off against what I’m fairly sure is a new opponent in the mysteriously named USCC, MCC were to bat first [Error: toss result not found] with a strong and stable looking lineup. Kent (welcome back, mate) and Musset started with confidence, getting through to 15/0 after 3 overs before Kent was bowled for 2 by a shoelace-bothering half-tracker.

McCaffery, promoted to first drop to “Give it the Heeeet” (whatever that means) kept the good work going, and with Musset peppered the boundary to the tune of 46/1 off 7.

At this point, Stig was heard to make predictions about record scores, with the opposition in ear-shot and everything.

In the 8th over, Musset deposited the ball onto the pavilion roof and retired on 35. Cox, with Stig’s words still ringing around the ground was bowled for a duck, bringing Wood in to really put the anchors on the scoring rate (that’s 3 off 16 balls for you, Trev)  “Young” Colin was still in charge, but soon reached 31 and retired. 82/2 off 12, what could possibly go wrong.  (Note from webmaster to mathematically-challenged reporter –  “putting the anchors on” yet maintaining the scoring rate at just below 7 an over?).

I’m not going to make cheap cliches out of the 13th over being unlucky, but a hat-trick is rather a conspicuous event, and kind of hard to sweep under the rug. Wood, Butcher and Browne were on the receiving end of that particular one, all bowled by Gaurav. Special mention to Browne for having an almighty heave at the hat-trick ball, it would have looked so good if he’d nailed that one for 6.

There was now a bit of a pause in proceedings as we tried to find some more batsmen to go in. This actually seemed to settle things down as Beacock (17*) and Thompson (8*) saw out the rest of the overs comfortably, including 10 runs off the 19th. Stig’s mid-innings prediction of 140, maybe even 150 was a bit off as we finished on 114/5. Thanks mate, can we count this as a Friendly Fire nomination?

Nevertheless, 114 is still very defendable, particularly with the pitch doing a bit and the sun dropping into the blinding zone.

Cleaver (2 for 20 off 4) took the new ball and struck in the first over, as the skipper took a tumbling catch to remove opener Rizuan for 0. TC took the next wicket too in the 5th, bowling Ankush for 9. Browne (1 for 18 off 3) joined the action in the next over as Thompson was calm under a high catch at mid off. 32/3 off six, we’re into their middle order and there’s a confident feeling around the field.

Watson (0 for 40 off 4) came on at the Eastern end and came in for some special treatment from Harry and Raheel, the latter showing some imaginative footwork to unsettle the bowler’s rhythm. Cox (2 for 14 off 4) came on at the other end, still smarting from his failure with the bat and found satisfaction as he dismissed both set batsmen, clean bowled.

Remarkably, given the way the match was panning out, both teams were on 83/5 after 13 overs. If we could only chisel out another couple of wickets we might find ourselves right on top again.

No chance. Lady Luck was still twisting the knife into Stig’s very own “We’re going to make ’em grovel” moment and new bowlers Musset and Thompson didn’t really stand a chance against those dark forces. Neither was able to find a way through and USCC got home in the 18th over, 118/5. Musset finished with 0 for 11 off 1.5 and Thompson 0 for 6 off 1.

Ah well, the new kit looked good and it was finally warm enough to sit outside at the Welly so it wasn’t a total write-off. Bring on next week and the start of double-header season!